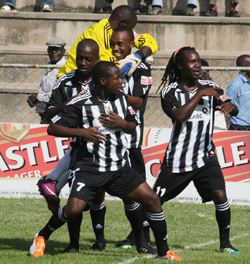 HIGHLANDERS Football Club’s principal sponsors BancABC have renewed their ties with the of the Bulawayo giants, which will see the financial institution giving Bosso $700,000 this year.
Club treasurer, Jerry Sibanda told members at an annual general meeting over the weekend that the deal would run for three years.
Already, BancABC have released $80,000 to Bosso for the acquisition of players and Sibanda said they are negotiating for the amount to be increased to $100,000.
“We are happy to announce that we have successfully negotiated with BancABC for sponsorship renewal and the package is $700,000 up from $240,000 that we had. This deal is with effect from January 1, 2014 and will end in December 2017.
“The deal will see BancABC paying players and Highlanders office staff, which means we have reduced some costs in terms of paying the administrative personnel. This deal will help ease our financial challenges,” said Sibanda.
The Bulawayo giants are in the red with a $562,410 deficit.
Highlanders chairman, Peter Dube, hinted that the $700,000 is for a year.
“We are grateful to BancABC for having faith in the club shown by the commitment that they have made, which is to renew our deal. It is the level of professionalism and good governance that the club has shown that won us confidence from our sponsors,” he said.
“On the finer details of the deal, I believe that BancABC, being a leading corporate organisation they would want to be the ones to spell out the details to you. But what I can tell you is that we submitted a budget which they approved. Actually we are looking forward to a fruitful relationship.”
As part of the new deal, BancABC also released $40,000 for Highlanders’ Inyathi pre-season camp of which the club used $10,000 for the exercise.
The deal with the bank is also flexible, allowing Highlanders to look for other sponsors.
“What we have done is to categorise the types of sponsorship deals into three being platinum, gold and silver,” said Sibanda.
“BancABC by virtue of being our primary sponsors who take care of salaries and signing-on fees are our platinum sponsors and they have allowed us to look for partners to take up gold and silver. We are hoping to use the gold or silver partners to bankroll our juniors.”Advertisement

The executive also urged supporters to behave during matches to protect the club’s image as well as reduce the amount of fines they are forced to pay for rowdy behaviour.
Last year, rowdy Bosso supporters cost the club $42,000 in fines after committing a number of offences, which included pitch invasions.
“The league introduced standing orders and fines for various offences at the beginning of the year (2013),” former Bosso secretary Nhlanhla Bahlangene Dube.
“From these fines brought upon mainly by our members, supporters and other fans the club is due to lose 84 percent ($42,000) of the runners-up prize money for the 2013
league season.
“This is not the best way to show our support nor displeasure on what we consider to be injustice against the club as it is costly. I must also add that no amount of derogatory language or songs will improve our situation at any given time, it only serves to tarnish the club’s name and no sponsor wants to associate with a littered brand.
“The loss of funds due to supporters’ wayward behaviour is disturbing and there is a need to find a strategy to speak to those people who express their dissatisfaction in an inappropriate manner.
“We have to educate these people and what we need is to even get to their comfort zones, where they sit in the stadium and educate them. The other thing is for PSL to be involved for Highlanders alone cannot succeed to deal with unruly elements.”