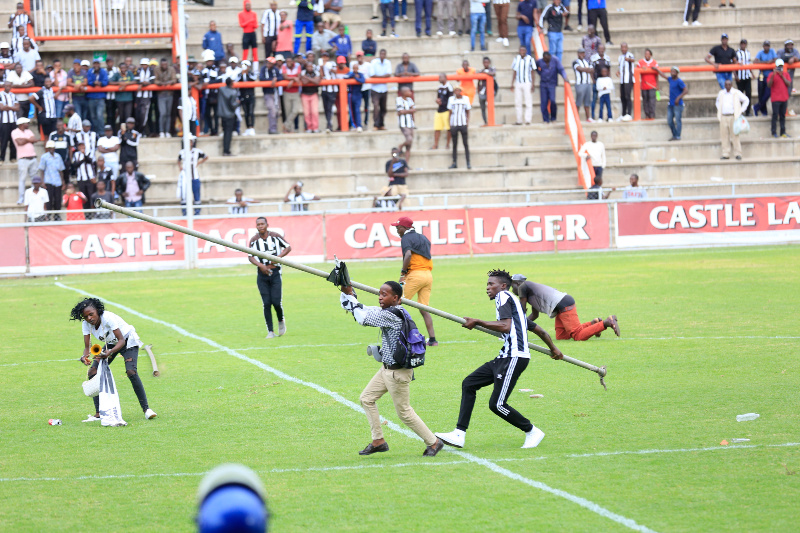 VIOLENT scenes witnessed in Zvishavane during the match between FC Platinum and Highlanders FC have reignited debate on how to end football hooliganism in Zimbabwe.

Dozens were injured in the violence which erupted following referee Kuzivakwamwari Jaravaza’s controversial decision to award the home side an 81st minute penalty when the match was seemingly heading for a one all draw.

Irate Bosso fans hurled missiles on the pitch and at FC Platinum supporters.

In turn, police threw teargas in a bid to put the situation under control.

But this only served to escalate the situation.

Bosso fans argued it was not a penalty and invaded the pitch, armed with stones and water bottles while hurling insults and threats to officers, players and officials.

As a result, the match had to be abandoned and it is likely the football giants will lose the three points because of actions by their fans, manager Vezigama Dlodlo and players; especially defender Peter Muduhwa. Bosso has a long history of crowd trouble, something which has led to many a pundit concluding the country’s second largest club has a ‘culture of violence’.

No one can blame those pundits; this is a club which in 2016 was once ordered to play in an empty stadium for similar reasons.

That decision was however suspended.

This is a club whose fans make no secret of their inclination to take the law into their own hands whenever refereeing decisions they do not agree with are made.

This is a club whose home ground, Barbourfields Stadium, has become a terrifying place to be for opposite fans, especially if you support Dynamos FC, over decades.

It is unsurprising that the latest episode, playing out some 387km away from Barbourfields, has been squarely blamed on Bosso fans. This is unfortunate because it will include thousands of innocent Highlanders fans of this otherwise fashionable, successful club.

Is Bosso To Blame For The Mandava Violence?

The answer is an emphatic yes!

So many teams have had unfavourable decisions made against them by local referees. Some of these referees have even been accused of being bribed to manage games in favour of certain teams, but it is only when it involves Bosso that violence has been witnessed.

Granted, referring standards in the country are appalling at the moment, which is why nobody has been good enough to officiate in international competitions, the last to do so being the retired duo of Felix Tangawarima and Brighton Mudzamiri, who officiated at the 2002 AFCON finals in Mali.

Bosso fans are guilty because they are not the only fans to have had their team “cheated” and whatever they felt at that particular moment was not new or special to an extent their pitch invasion could be understood or justified.

According to Bosso the referees are wrong, the police are wrong and, as happened in 2014, opposing players were wrong. The club is never wrong!

The administration at Highlanders knows this, and so do the fans who challenged the police in Zvishavane.

The premier soccer league (PSL) is clear about this.

No amount of lipstick can beautify the violence that Highlanders continues to wield across the country and especially at BF.

What Must Be Done?

Bosso deserves no sympathy from football administrators, fans or any peace loving football person. Bosso must be punished for their actions.

They, and any other football club that may be tempted to unleash violence, must lose each and every point whenever its fans take matters out of the referee’s hands and into their own.

Its statement in response to heavy-handedness by the police in Zvishavane falls far short of addressing the matter that has been attached to it as an institution for decades, VIOLENCE BY ITS OWN!!!

What were the police to do when fans were captured by broadcaster ZTN carrying stones onto the pitch, what where they to do after their canine, Ceaser had been struck and has been admitted for treatment?

A poorly written statement by Highlanders. A lot of things went wrong:
1. The officiating was criminal
2. The behaviour by a section of Bosso fans is unacceptable and should be condemned.
3. The reaction by ZRP is a clear indication that they do not understand their mandate pic.twitter.com/IRrJJTSHF9

The FC Platinum bus was struck, buses and motorists in town were struck and 15 people have since been arrested.

The fans invaded Mandava’s pitch singing songs and threatening violence, not Methodist choir hymns. Their acts of violence were far beyond being dealt with by word of mouth, captain Ariel Sibanda can testify.

Barring its fans might not work. As was witnessed in Mandava, some of these fans had travelled from Bulawayo hence punishing the thousands who did not travel might not be justified.

That was situation. It happened during the match between FC Platinum & Highlanders pic.twitter.com/7FZkjtqm8w

The penalty must reverberate to BF where some at the Soweto end pile up stones to use on opposing fans after a match, where some have been pictured carrying knobkerries and catapults for use whenever they feel aggrieved.

We cannot tolerate one team creating war-zones wherever and whenever they feel like doing so.

If Bosso does not pay, if Bosso does not lose the three valuable points it sought to collect from Kugona Kunenge Kudada, if they are not heavily fined; then the PSL should be ready for more war-zones; not just from Bosso but every other aggrieved team which would take this case as a precedence.

People cannot go out to enjoy the game and return with scarred faces.