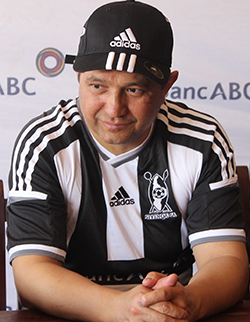 HIGHLANDERS coach Erol Akbay has blamed fatigue for his side’s 1-0 league loss, to Caps United at the National Sports Stadium on Sunday.
It was the second game in a row for the Bulawayo giants to fail to win after drawing 0-0 with Caps United on Thursday.
The results saw them let leaders FC Platinum, open a five-point gap above them.
Dominic Chungwa’s second half goal for Caps United saw Highlanders being condemned to a defeat on Sunday as United revenged after losing to Akbay’s side in the reverse fixture in Bulawayo.
“Our players were not so good. We were always coming second to the ball thereby allowing our opponents to be stronger than us,” Akbay said.
“Maybe it was fatigue on the part of players. If you play three games in a week it will always be very difficult for you but I do not want that to be an excuse.
“Caps were the better side and we are also to blame because we should have wrapped the game in the first half but we failed.”
With five points behind FC Platinum, Highlanders are however hoping to recover in their upcoming games and cover the gap.