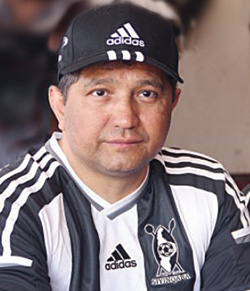 HIGHLANDERS coach Erol Akbay believes they have to decide their own destiny by ensuring maximum points, in the last three games of the season if they are to win the league title.
The Bulawayo giants are just a point behind leaders Caps United and are keen to end a 10-year league title drought.
After taking advantage of Caps United’s 3-3 draw, with Dynamos by beating Bulawayo City 3-1 on Sunday, Highlanders reduced the gap between them and the leaders to just a point.
They also had to thank FC Platinum’s 1-1 draw, with Ngezi Platinum which allowed them to leap to second position.
Now, nine points are at stake before the league campaign ends and Akbay believes they have to decide their own fate.
“As I have been saying lately, there is no room for mistakes now. We have to do it on our own for us to win the league title,” Akbay said.
“We have been following how Caps or FC Platinum have been playing but we now just have to focus on ourselves. Even if those other teams win their games we have to make sure we win ours.
On the second-past game we will play FC Platinum and that is one game that is tricky for us but we just have to go out there and do businesses for ourselves. We do not want to pray and hope for the other teams to drop points but we should build our own road to the championship.”
Akbay is in his for season as Highlanders coach and could win the league title at the first attempt.