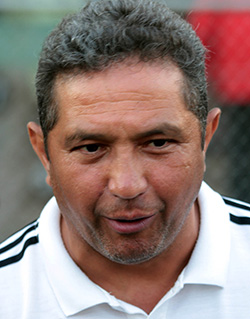 HIGHLANDERS coach Erol Akbay has predicted that How Mine will not make it easy for them in Sunday’s Chibuku Super Cup quarterfinal showdown at Barbourfields Stadium.
The Bulawayo giants will be facing an unpredictable How Mine side that is high in confidence in this competition, after knocking out another giant Dynamos in the first round.
How Mine have also been blowing hot and cold in the league campaign, hence providing Akbay with a headache of facing such tricky opponents.
The Dutchman has however thrown caution to the wind, saying he expects a tough afternoon on Sunday.
“How Mine are not a small team but, they are a big and quite difficult to beat. We might have beaten them twice this season but it was not easy for us,” Akbay said.
“I can tell you that on Sunday we are going to have a tough game. What we would want to avoid is getting to penalty shootouts. We will try to win inside regulation time and we need fans to come and support us.”
Interestingly, it was How Mine who eliminated Highlanders from last season’s edition, of the Chibuku Super Cup.
Highlanders however cannot be ruled out of this contest, as they have had a fair season that has seen them chasing a league and Cup double.
At position three on the log in the league campaign, Akbay and his men could win the league title but now they have to pass the How Mine test to keep live hopes of the Chibuku Super Cup.