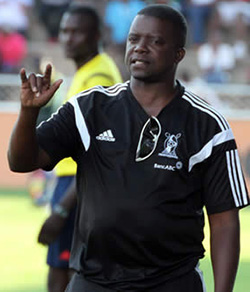 HIGHLANDERS coach Bongani Mafu says the unity of purpose in his team will see them through against perennial rivals Dynamos in a Castle Lager Premiership match at Barbourfields Stadium on Sunday.
In the reverse fixture Dynamos won 3-2 in a match that was marred by controversy after Highlanders were controversially denied an equaliser by assistant referee Bongani Gadzikwa. He has since been suspended.
However, Mafu is looking ahead to Sunday’s showdown.
“The second half of the season has been good with the spirit of working together and the unity of purpose has come through. We now understand each other better with the boys,” Mafu said Thursday.
“We did very well against Dynamos at Rufaro and I believe the boys know what is expected of them at home, we will fight to the end.”
Highlanders might be using striker Thomas Chideu for the last time as he has been snapped by Ajax Cape Town of South Africa. His work permit is still being processed before the he can join the Cape Town-based side.
Under 23 striker Knox Mutizwa, who scored a double against Dynamos, is a real threat together with the experienced Obadiah Tarumbwa.
On the other hand, Dynamos have re-signed striker Takesure Chinyama and acquired Richard Kawondera from Triangle in the offseason and both are in line to start.
Meanwhile, police in Bulawayo have issued a stern warning to would-be hooligans ahead of the encounter at Barbourfields Stadium on Sunday.
Bulawayo police spokesperson Inspector Precious Simango said they would not tolerate any disturbances in and around the stadium.
“Our message has always been clear that we don’t tolerate violence. Would-be offenders are warned against causing chaos in and outside the stadium as we’ll be there in full force.
“We want people to enjoy football and head back to their respective places without any disturbance,” said Inspector Simango.