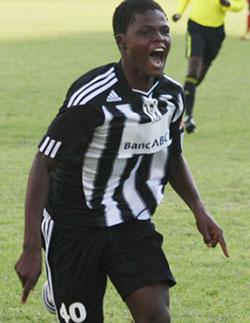 Highlanders 2-1 Chiredzi FC
OZIAS Zibande scored twice as Highlanders finally ended a six match winless streak with a hard fought win against relegated Chiredzi Football Club at Hartsfield on Monday afternoon.
Zibande opened the scoring after 14 minutes when Chiredzi were just beginning to settle into the match and added his second 10 minutes later to set Bosso on their way to a first win in six matches.
Gabriel Nyoni, who was returning from an injury sustained when the Young Warriors played Swaziland last month, had the ball in the back of the net eight minutes from the breather but it was ruled out for offside.
Sam Nsimbu pulled one back for Chiredzi, unsettling a Highlanders team that was in charge of the game just after Zibande had crashed his effort against the crossbar in the 65th minute.
Chiredzi had to finish the match with 10 players after goalkeeper Simon Tafikire was shown a red card for a professional foul on Highlanders striker Godfrey Matarutse in the 86th minute and had to use an infield player for the rest of the match.
Highlanders were second best in the second half and struggled to keep pace with the Chiredzi, but held on for a win that was received with a huge sigh of relief by interim coach Mark Mathe.
“I think we did well in the second half and converted the chances that came our way,” Mathe said in his post-match interview.
“We could have scored more though and we had one or two chances in the second half, but we were always second to the ball.
“But at least I am happy that we managed to collect maximum points and we now look forward to the next two games against Shabanie (away) and Chapungu (at home).”
The win saw Highlanders moved into sixth place with 42 points, the same as Hwange but with an inferior goal difference.
Highlanders parted ways with Kelvin Kaindu on September 28 after the 3-1 loss to ZPC Kariba at home and since then, under Mathe, have lost all league and cup competitions they have played in.
They lost 1-0 to Harare City, 4-0 to Caps United, 1-0 to Chicken Inn and 3-1 to Hwange. They also lost 3-0 to Harare City in the semi-finals of the Chibuku Super Cup.
Next, they travel to Shabanie Mine on Sunday before the league takes a break to accommodate the Chibuku Super Cup final between Harare City and FC Platinum.Advertisement

Bosso’s last league match will be home against Chapungu.