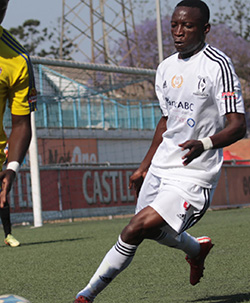 ALLEN Gahadzikwa scored the only goal that helped Highlanders see off a battling was Harare City in a Castle Larger Premiership tie at Rufaro on Thursday.
The former Caps United midfielder who was deemed excess to requirements at the Green Machine got to the end of a wonderful delivery from the right by Prince Dube on 60 minutes
to nod the ball home.
As table-toppers FC Platinum and second placed Caps United stuttered to goalless draws against Border Strikers and ZPC Kariba on Wednesday, Highlanders were the major beneficiaries as they cut the lead at the top to just four points.
With only six matches left in the campaign, the win over City sets the stage for an intriguing conclusion to the title race. Highlanders now have 44 points, four adrift of FC Platinum while Caps United remain on second place with 47 points.
Highlanders coach Erol Akbay was happy with the three points. He said the victory was important in motivating his charges ahead of the next matches.
“We created chances in the first half,” he said.
“In the second half they didn’t play good football. They thought 1-0 its ok but they have to play football. But three points is very important. Ariel Sibanda is a very good goalkeeper. He is a penalty specialist
“We have six games left and if we have get a chance we have to go for the championship. This match is important for motivation for the next match.”
Harare City coach Moses Chunga said he was disappointed to lose at home after playing so well. He said they likely have missed the penalty as his player was disturbed following protests by Bosso fans who threw plastic bottles on the pitch.