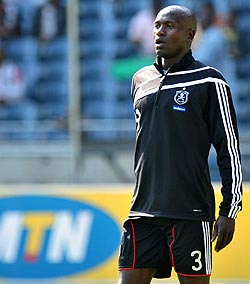 SUBSTITUTE Kuda Mahachi scored his first Highlanders goal as the Bulawayo giants continued with their pre-season fine run after edging FC Platinum 1-0 in a friendly match at Barbourfields Stadium on Sunday.
The victory came seven days after they beat Harare City 2-1 in the pre-season tournament Bob90 Super Cup.
It was also a second successive win for Highlanders caretaker coach Mark Mathe, who has been in charge in the absence of head gaffer  Kelvin Kaindu, who is in the UK for a Uefa coaching badge.
Mahachi’s long range effort on the hour mark buried the platinum miners whose new forward Njabulo Ncube was denied from the penalty spot by ex-teammate Ariel Sibanda a minute before half time. It was Ncube’s first return to Barbourfields since dumping Highlanders last month.
Mathe awarded starts to new signings Khumbulani Banda, Felix Chindungwe, Valentine Ndaba, Joel Ngodzo, Welcome Ndiweni and striker Mkhululi Dube who all put up an impressive show.
Former Dynamos defender Gift Bello started for FC Platinum who rested most of their regulars and largely fielded their new acquisitions who included Wisdom Mutasa, Walter Musona, Marshall Mudewe and James Marufu.
Dube could have thrust Highlanders ahead 10 minutes into the match but his header went just wide off a Banda cross.
A well-positioned Musona had a shot over the bar and a freekick off target as the visitors responded but the teams went 0-0 for the halftime besides Ncube’s penalty miss.
Meanwhile, former Warriors and Orlando Pirates defender, Zvenyika Makonese made a surprise appearance for Highlanders reserves at Barbourfields on Sunday.
Makonese featured in the Bulawayo giants’ 2-1 friendly match loss to Division One side, Black Boots.
The 36-year-old centre back is trying to end a two-season absence from football.
Last month he tried out at How Mine before he was asked to stop training by coach Philani Ncube just three days into the trials.
He also spent the late stages of last season training with relegated Tripple B.
Makonese last tasted top-flight football in 2011 in his return to old club Shabanie Mine who employed him as a striker.
Highlanders reserves also paraded their Canadian attachés in their clash with Black Boots which preceded the first team’s friendly with  FC Platinum.Advertisement