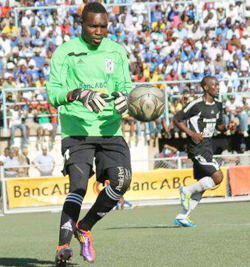 Hwange 3-1 Highlanders
HIGHLANDERS fell apart again, for the fifth game in a row, when they were dismantled by a mean Hwange machine with three second half goals in a Castle Premiership match at the Colliery on Wednesday.
The former champions remained rooted at seventh place with 39 points as they have only managed two wins in the second half of the season.
Bosso are separated by three points from the pair of How Mine and Buffaloes.
Goalkeeper Munyaradzi Diya, who was only playing his second match in the second half of the season, converted from the spot in the 20th minute to give Bosso the halftime lead.
But the hosts returned from the breather a changed team as Evans Rusike drew parity seven minutes after the restart.
Hwange took the lead in the 65th minute when Munyaradzi Mungadze punished the poor defence before Newman Siansani added the third in the 90th minute to complete a remarkable comeback for the coalminers.
The win ensured that Hwange returned to fourth spot on 42 points on a better goal difference from FC Platinum who drew 0-0 with Caps United at the National Sports Stadium.
Caps are in third spot with 46 points, while ZPC who beat Buffaloes 3-1 at Gwanzura, maintained second spot with three points separating them from leaders Dynamos, who pummelled Harare City 5-3 at Rufaro Stadium.
The leaders have 50 points and are sure to maintain their charge for a fourth straight title when they engage lowly Bantu Rovers at Rufaro this coming Sunday.
In other matches, the last kicks of a dying horse proved very dangerous for Chapungu who saw their season’s unbeaten home run screech to a halt when they went down 3-2 to relegated Bantu Rovers at Ascot Stadium.
Chiredzi, who have also been sent packing to the lower division, found no favours from fellow strugglers Black Rhinos who beat them 2-1 at Chishamiso.
Triangle drew 1-1 at Chicken Inn in Bulawayo to remain in the last relegation spot with 31, the same as Black Rhinos. Chicken Inn now have 41 points as the battle for a place in the top four rages on.
Shabanie Mine were hammered 3-1 by How Mine at Maglas and dropped to 12th place, one below Chapungu who have 33 points.
RESULTS
Wednesday Results: Harare City 3-5 Dynamos (Rufaro), Shabanie Mine 1-3 How Mine (Maglas), Chicken Inn 1-1 Triangle (Hartsfield), Chapungu 2-3 Bantu Rover (Ascot Stadium), Chiredzi 1-2 Black Rhinos (Gibbo), Caps United 0-0 FC Platinum (National Sports Stadium), ZPC Kariba 3-1 Buffaloes (Gwanzura), Hwange 3-1 Highlanders (Colliery).Advertisement