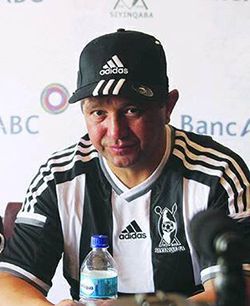 HIGHLANDERS’ quest to end the season with a double were dashed following Sunday’s 1-0 Chibuku Super Cup semi-final loss, to Ngezi Platinum at Barbourfields Stadium.
The Bulwayo giants are in prime position to end a decade long league title drought and were also chasing the Chibuku Super Cup, which comes with a ticket to play in the Caf Confederations Cup.
After bowing out of the Chibuku Super Cup, Erol Akbay’s men are now fully focused on the league title race.
They are second on the log with just a point below leaders Caps United.
With three games remaining before the league concludes, Highlanders face what is a crucial moment to them.
“We did not play well to beat Ngezi. We conceded from a set piece and that that made a big difference,” Akbay said.
“We learnt a lot from this match and we will translate them in the league games. The Ngezi match was a very important one and in the league we also face important games. We now know how to handle such crucial games. That is why I said right now there is no room for mistakes because every point is important.”
In their penultimate match of the league campaign, Highlanders play FC Platinum who are a point behind them in a league match.
Akbay has conceded that the FC Platinum match where they will be away will be a decider.Advertisement