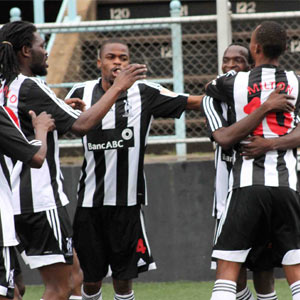 Bruce Kangwa struck a brace, to help Highlanders shoot to the summit of the Castle Larger Premier Soccer League on Wednesday, with a 2-0 win over visiting Border Strikers at Barbourfields Stadium.
Kangwa’s second half double saw the Bulawayo giants, opening a two-point gap at the top ahead of second-placed Caps United.
It was a match which Highlanders could have won by a wider margin had it not been for a wasteful Knox Mutizwa, especially in the first half while his striking partner Prince Dube was also guilty of fluffing good scoring opportunities.
Mutizwa could have thrust Highlanders ahead as early as the 10th minute but, blasted an effort wide while positioned well.
It was however Border Strikers who had begun the match on a high but immediately surrendered control of the exchanges to Highlanders.
Dube combined well with Mutizwa but lacked the final kill leading to a halftime goalless stalemate.
But Highlanders returned from the breather fired up and in one of their raids, Border Strikers succumbed to pressure with a handball by one of their defenders inside the box.
Kangwa took the penalty initiative to break the deadlock by converting.
At this time, Highlanders were now in full charge of proceedings.
Fifteen minutes before full-time Kangwa had some nice exchanges with Mutizwa with the former ending the build up with a shot into the nets to double Highlanders’ advantage and seal his brace.
Highlanders will now seek to consolidate their lead as they bid to break a decade long league title drought.