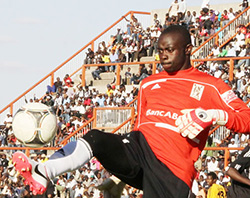 Buffaloes 1-1 Highlanders
HIGHLANDERS survived a penalty scare as they held on for a point at Sakubva on Easter Monday against Buffaloes in a Castle Lager Premier Soccer League match.
The hosts were awarded a penalty in the 21st minute after Bosso defender Teenage Hadebe tackled Lloyd Katongomara from behind inside the box and the referee awarded a penalty.
But keeper Arial Sibanda saved the kick from Buffaloes skipper Jacob Muzokomba.
Meanwhile, at Luveve in Bulawayo, Edmore Chirambadare scored twice as Chicken Inn thumped Hwahwa 2-0.
Signed from Tsholotsho Football Club in December, Chirambadare struck in the 14th minute before completing his brace four minutes after the breather.
And at Vhengere, Triangle continued their fine run when Richard Kawondera scored the only goal of the match as they edged Dongo Sawmills 1-0.
The match at Ascot Stadium in Gweru between Chapungu, who are yet to score a goal this season, and ZPC Kariba was called off due to a waterlogged pitch after heavy rains in the morning.
At White City Stadium, Tsholotsho scored through Erico Phiri two minutes from the end to salvage a point after Hwange had led from an Evans Rusike strike in the 70th minute.
The 1-1 draw means Hwange are yet to win in four league starts this season.
RESULTS
Easter Monday: Dongo Sawmill 0-1 Triangle, Chicken Inn 2-0 Whawha, Caps United 1-1 Dynamos, Tsholotsho 1-1 Hwange, Buffaloes 0-0 Highlanders.
Easter Sunday: Flame Lily 1-1 How Mine
Good Friday: Whawha 1-1 Harare City, Chicken Inn 1-0 Tsholotsho, Highlanders 1-0 Hwange Dynamos 1-0 Dongo Sawmill, Triangle United 3-0 Chapungu