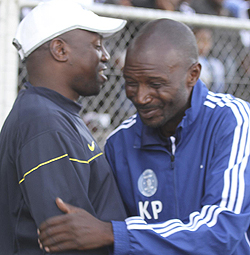 Dynamos 2-2 FC Platinum; Tripple B 2-3 Highlanders
FC PLATINUM lost their two-point lead at the top of the Premier Soccer League table on Wednesday after being held by Dynamos at Rufaro.
Highlanders, 3-2 winners over Tripple B at Mandava in Zvishavane, drew level on 16 points with the leaders.

Dynamos began the match with much promise and were ahead through double scorer Washington Pakamisa on 28 minutes.
Platinum battled back and Charles Sibanda had them level after 66 minutes before Winston Chiwetu added a second three minutes later to give the visitors a deserved lead.
But Pakamisa then saved Dynamos from their first defeat of the season with an equaliser 16 minutes from time.
The draw, Dynamos’ sixth in seven matches, left Callisto Pasuwa scratching his head with his men already seven points behind the leaders.
“It was tough match,” Pasuwa admitted at the final whistle. “We had all the chances to wrap up the game in the first half but we could not convert. Now the pressure is back on us again.”
His opposite number Tenant Chilumba was just happy to end Platinum’s four-match losing streak to the champions.
“The jinx had to be broken and we could have taken all the three points with a bit of luck. I’m happy with the response of the team in the second half. Our focus now shifts to our next match at home against Tripple B on Saturday.”
At Mandava, Njabulo Cube, Mthulisi Maphosa and Cleopas Dube were on target as Highlanders kept their title dream alive with a 3-2 win having fallen behind to the Beitbridge team.
CAPS United lost 1-0 away to Chicken Inn who scored late through Tendai Ndoro.

Triangle and Monomotapa drew 2-2 at Gibbs while Hwange picked up a point against Shabanie at Maglas.