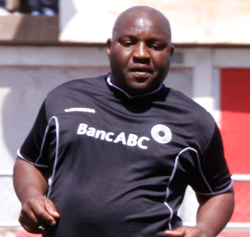 HIGHLANDERS legend Willard Mashinkila-Khumalo has died.
Khumalo passed on in a Bulawayo hospital, where he has been hospitalised since Wednesday, after a long battle with diabetes.
Zifa president Cuthbert Dube expressed shock and grief over the loss of Khumalo to the association’s website.
“We are deeply saddened by the death of Willard a true legend who was impressive for the Warriors and Highlanders whenever he was called to duty,” he said.
“ZIFA is in mourning with his family, friends and the local football family as everyone grapples with this shocking loss.
“Lala ngokuthula Nduna, qhawe lenguqu (rest in peace true football hero).
“Our thoughts and prayers are with the Khumalo family in this time of grief and we encourage them to seek comfort and solace in the almighty,” he said.
Known as Nduna (Chief), Khumalo was a product of the Highlanders junior policy which also produced his late cousin Mercedes ‘Rambo’ Sibanda, Madinda Ndlovu, Netsai Moyo, the late Nhamo Shambira, Fanuel Ncube and Benjamini Konjera, amongst many others.
He was probably one of the most consistent and versatile football legends Zimbabwe ever saw as he was useful in both the middle of the park and at the back.
He was an integral member of the all-conquering Reinhard Fabisch’s Dream Team of the 1990s. His spell with the Dream Team was all but ended by an injury he picked on the night they played against Togo in Harare in 1992.
Under Fabisch he played alongside the likes of John Phiri, Peter Ndlovu, Paul Gundani, Carlos Max, Henry McKop, Adam Ndlovu, Ephraim Chawanda, Mercedes Sibanda and Francis Shonhayi.
He also coached Lancashire steel, Highlanders and Mwana Africa.

A bow for the Induna … Minute of silence for Willard Khumalo before the Caps-Dongo match
Perhaps his best moments were when he played in Germany from where Bosso regularly called him back to feature in the then Natbrew and Zifa Cup finals against Dynamos.
Ever nimble footed, Khumalo would dazzle his opponents, perform his trademark false kick, before distributing a killer pass, a performance to which the fans, including from the opponents end, would roar: ‘Maweeee!”.Advertisement

So gifted was Khumalo that many felt that he was cheated of the 1987 Soccer Star of the Year award which was won by Rambo.
Mawee and Rambo were also good friends-so close that when their granny died, they turned up with bald heads and put up a stunning performance.
Outside the pitch, Mawee was a known socialite, gifted with a sense of humour.