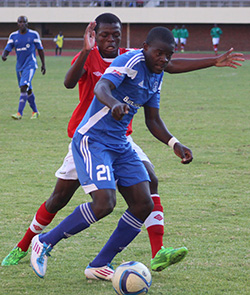 DYNAMOS coach David Mandigora has expressed concern over his side’s continued dropping of points at home after Sunday’s 1-1 league draw with Triangle at the National Sports Stadium.
Ocean Mushure’s injury time free kick saved Dynamos from home humiliation as it cancelled Felix Kuswatuka’s 65th minute goal for Triangle.
The Harare giants had six days earlier also dropped two crucial points after being disappointingly held 0-0 at home again by debutants Tsholotsho.
The latest results have piled more pressure on Mandigora who has been a subject of verbal abuse from the club’s fans in the last two matches despite being at number two on the log.
With leaders Chicken Inn now four points clear at the top, the last two games have also denied Dynamos a chance to reclaim the lead.
Interestingly, Mandigora’s side were beaten 3-0 at home by Chicken Inn last month.

“Our plan before the season started was to collect as many points at home as possible. But we’re failing to do that and obviously that is very worrisome,” Mandigora said.
“Getting at least a point away and winning at home can make us secure. We really need to start maximizing home advantage and make sure we do not drop points at home.
It is a matter of scoring very early in the match, in the 10th or 20th minute to unsettle our visitors and defend our goals until the end. But we are failing to do that.”
Mandigora also expressed worry over his misfiring strike force.
Highlanders’ Mafu remains optimistic
AFTER drawing their league third match of the season last Saturday, Highlanders coach Bongani Mafu believes his team can finish the season stronger if they are consistent.
The Bulawayo giants were held 2-2 away at FC Platinum to mark a second straight match unbeaten after having beaten WhaWha 2-0 at home the previous weekend.
Obadiah Tarumbwa and Knox Mutizwa were on target against WhaWha and we’re back again to strike in the draw with FC Platinum.
The stalemate was not a welcome result by the club fans as running battles characterized the aftermath of the match while supporters of both clubs clashed at the instigation of Highlanders fans.Advertisement

Mafu however, remained adamant that his team is on track to getting positive results although he lamented a low conversion rate.
“Week in, week out we play very well. We play some good football but just that we fail to turn into goals the good scoring chances we always get,” Mafu said.
“We drew with FC Platinum after scoring two goals but we could have scored more. We had a goal disallowed and it is easy to simply say that we got three goals but we could have scored more had we utilized all the chances we got.
“I believe we can do more and we can finish the season on a respectable position. We are doing well except just scoring and football success is usually measured by goals. There is still a chance to get ourselves into a good unit.”
Highlanders are now on position seven on the PSL log.
A poor home form has seen them lose points as they four winless matches at their Barbourfields Stadium home.