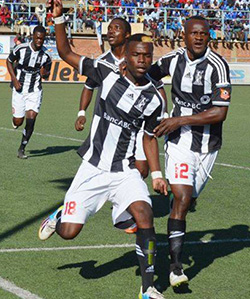 HWANGE: Highlanders FC got their premiership campaign off to a high flying start dowsing coalminers Hwange FC 3-nil in their own backyard in a pulsating match played at the Colliery Stadium yesterday.
The Eroy Akbay-coached Bosso turned the heat on the hosts in the last 20 minutes of the game in what had looked like would be a share of the spoils.
A tactical second half substitution by Bosso which saw Prince Dube come in for out of sorts Ralf Matema in the 59th minute and Rahman Kutsanzira who came in for Douglas Sibanda in the 67th minute changed the complexion of the game as the visitors piled more pressure.
It was hard running defender Bruce Kangwa, playing as a midfielder, who drew first blood from close range in the 72nd minute to give Bosso the lead from a one-two, one-two situation with King Nadolo, Knox Mutizwa and Dube.
Mebele Njekwa, Hwange coach and his executive have themselves to blame for the loss for fielding old guards Obert Moyo, Tonisani Sibelo and David Boriwondo and Farayi Vimisayi.
They came on as substitutes but they could not match the hard running and dribbling Bosso youngsters in the likes of Nadolo, Mutizwa and Dube, hence they gave in towards the end of the game probably due to fatigue.
And the coalminers have towering goalie London Zulu to thank for a somewhat ‘respectable’ score-line as he was kept busy by the Highlanders strikers but pulled some fine saves to deny them goal. He was however, to give in as a result of poor defending by Moyo, Sibelo and Pritchard Mpelele.
Dube could have given Bosso the second goal in the 79th minute but his weak shot sailed past the goal to the left with only the goalkeeper to beat.
Three minutes later he was at it again running past defenders from the right but this time turned provider as he, with only Zulu to beat, chose to square a pass to Mutizwa who said thank you with an easy goal from the left.
Nadolo was unlucky to leave without a goal after a fine afternoon which was however almost tainted by a tussle with Tonisani Sibelo in the first half as he charged at the Hwange defended after he had hackled him down.
It took referee Hardly Ndazi to restrain he two as their teammates joined in and the two escaped with a caution by word of mouth.
The introduction of Vimisayi almost paid dividends for Chipangano as Ariel Sibanda in goals for Boss was called for two fine saves but was equal to the task.Advertisement

Bosso defenders captain Felix Chindugwe, Honest Moyo and newboy Benson Phiri were resolute.
Four minutes from time, Mutizwa capped a fine afternoon for Bosso with his second goal after receiving a pass in the box to beat an exposed Zulu.
Akbay was happy with the result but warned his charges to ‘play football’ if they are to continue getting results.
“The first half was bad and i don’t know what happened but we played well in the second half. The boys need to start playing football,” he said.
On the Nadolo/Sibelo incident, Akbay said: “That was not called for but it was not him alone, everyone was wrong in the first half.”
The expatriate defended his striker Matema saying he is always a tender striker, as the 2006 top goal scorer would go down on every contact with an opponent.
Hwange coach, Njekwa, was at pains for the loss saying he wondered how his charges lost it after showing resilience for a greater part of the game.
“We started and played well only for the boys to falter on last minute. Anyway it was the first match and we need to go back to the drawing board,” he said.
An appreciative crowd dominated by travelling Bosso fans from Victoria Falls and Bulawayo kept the two teams cheered up.