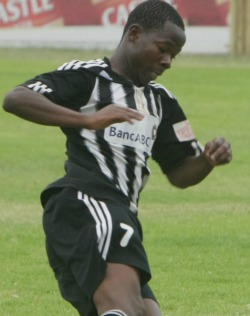 Monomotapa 2-5 Highlanders
HIGHLANDERS recovered from a shock defeat to How Mine to hammer former champions Monomotapa in an exhilarating Castle Lager Premiership match at Rufaro on Thursday.
The comprehensive victory took Highlanders to the summit of the league table with 23 points with rivals FC Platinum slipping to second position with 21 points after losing at home to Hwange on Wednesday.
Highlanders striker Graham Ncube and Mthulisi Maphosa scored a brace each with gangling striker Njabulo Ncube weighing in with the other goal after converting from the penalty spot while former Gunners forward Ismael Lawe scored a brace for Monomotapa.
The home side dominated the first half in which they created plenty of chances only to be let down by poor finishing in the final third. Still, they raced into the lead with Lawe beating Innocent Mapuranga before unleashing a rasping shot into the nets after 13 minutes.
Graham Ncube also had a good chance after working his way past a couple of defenders but directed his effort wide. In the 21st minute Zvikomborero Biserk also came close but directed his effort wide.
But Highlanders refused to be cowed into submission as they continued to probe their opponents and, on 22 minutes, Maphosa was denied with a classy save by Zvaita who kept goal for Monoz.
However the visitors were rewarded for their industry on 25 minutes with Graham Ncube planting a firm header into far left corner of the post off a cross from Milton Ncube to level matters.
The home side threatened to hit back a few minutes later when Lawe won possession in the box but his rasping shot was tipped over the bar by goalkeeper Ariel Sibanda.
Just before the break, Njabulo Ncube was fed by Milton Ncube and released a powerful shot, but Zvaita got a full glove to the ball to deny him what could have been his first goal while Monomotapa’s Aggripa Murimba and Lawe also came close but directed their efforts off target.
Highlanders returned from the break a much stronger side and carved out good chances. Kevin Kaindu made a tactical substitution in the 48th minute bringing on utility player Eric Mudzingwa for Hillary Madzivanyika, who helped stabilise the midfield.
The changes immediately paid dividends as defender Morgen Mungombe brought down Graham Ncube and giant referee Batsirai Muchenje pointed to the spot. Njabulo stepped up to take responsibility for Highlanders second goal.Advertisement

A minute later Maphosa won possession on the left before drilling a low ground shot into the nets for Highlanders’ third goal forcing Monoz coach Biggie Zuze to makes substitutions, bringing on Hammilton Masambuko for Praise Tonha with Never Tigere coming on for Muramba.
Kaindu also responded by pulling out Rio Moyo and bringing on Beaven Chikaka.
Graham Ncube then missed a headed opportunity on 72 minutes and Monoz who pulled one back with Lawe beating keeper Sibanda with a low shot after  a neat exchange of passes with Obey Mwerahari.
Ncube was denied by the upright at the stroke of full time as Highlanders continued to take dominate. He however, made amends right at the death with a rasping shot to complete his double.
The tireless Maphosa then sealed the victory with a low ground shot with the Monoz defence guilty of ball-watching.
Kaindu was naturally delighted with the win.
“If we could score five goals away from home, it’s a good performance considering that we are coming from a defeat,” he said.
“Monomotapa always gives us problems but we came back stronger in the second half. We used the second half to our advantage but it has been difficult,” he said.
His opposite number Zuze said: “Credit to Highlanders. They were too strong for us in the second half. But we could have won the match in the first half. We created plenty of chances.”
Meanwhile, at Mandava, Ronald Pfumbidzai scored direct from a corner kick to give a Caps 1-0 lead over Tripple B at half time.
However, the Beitbridge side, who fired coach Friday Phiri on Wednesday fought back to deny the Harare side maximum points after a 2-2 draw.
Timire Mamvura equalised for Tripple B before Tendai Samanja gave Caps the lead, but Aleck Marime ensured a share of the spoils late in the game.
Weekend Fixtures
Saturday: How Mine vs Chicken Inn (Luveve), Black Rhinos vs Triangle (Gwanzura), Motor Action vs Dynamos (Rufaro)
Sunday: Highlanders vs Black Mambas (Barbourfields), Caps United vs FC Platinum (NSS), Buffaloes vs Shabanie Mine (Sakubva), Hwange vs Monomotapa (Colliery), Harare City vs Tripple B (Rufaro)