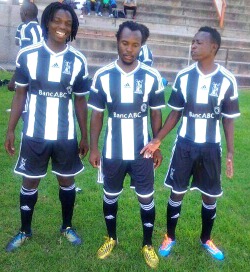 Highlanders 0-0 FC Platinum
(FC Platinum won 6-5 on penalties)
FC PLATINUM beat Highlanders to reach the final of the Independence Trophy at Barbourfields Stadium on Sunday.
Platinum, winners of the same competition in 2012, will now meet Dynamos who also needed a penalty shootout win over Harare City (4-2) to reach the final at Rufaro on Sunday.
Kudakwashe Mahachi missed the decisive kick for Bosso with the two teams tied at 5-5 as FC Platinum goalkeeper Talbert Shumba easily saved.
Highlanders converted through Mthulisi Maphosa, Charles Sibanda, Bruce Kangwa, Gabriel Nyoni and Innocent Mapuranga while FC Platinum’s Qadir Amin, Thabani Kamusoko, Raphael Muduviwa, Wisdom Mutasa and Nelson Maziwisa found the target before the sudden death.
After Mahachi had missed his spot kick, up-stepped James Marufu to beat Bosso keeper Njabulo Nyoni to set a tantalising final against the Harare giants, Dynamos on April 18 at the National Sports Stadium.
FC Platinum coach Lloyd Mutasa was delighted at setting up a final against his former team.
“I am happy with the performance of the boys and the fact that we beat Highlanders at home for the first time since 2011.
“We created several chances but we could not turn the creativity into goals but I am looking forward to the final,” Mutasa said.
For Highlanders, it was their fourth loss in a row after going down 2-1 to Chapungu in the CG Msipa Charity Shield semi-finals, 2-0 to Dynamos in the Bob90 Super Cup final and 2-0 in a friendly against FC Platinum at Mandava last week.
Coach Kelvin Kaindu was not available for the match as he is in the United Kingdom completing his UEFA B licence.
While the Highlanders hierarchy is always quick to defend the coach, the problems are there for all to see that the former champions are ill-prepared for the season which starts next Sunday with an away tie to Chapungu in Gweru.Advertisement