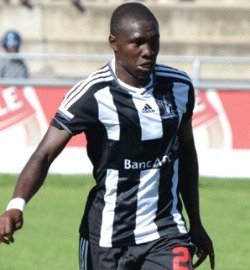 HIGHLANDERS kept 10th place in the Castle Lager Premiership but with 31 points after defeating Dongo Sawmill at Barbourfields on Sunday.
It was dramatic first 45 minutes that gave Bosso the much needed win they craved for in their fight against relegation.
Skipper Obadiah Tarumbwa gave the hosts the lead after 25 minutes.
Then leading scorer Knox Mutizwa with 11 goals this season won a penalty in the 37th minute after he was tripped in the box.
But Mutizwa missed his spot kick.
In the 44th minute, Rahman Kutsanzira made it 2-0.
But barely sixty seconds later, defender Douglas Sibanda, was red carded for a second bookable offence.
At the Colliery, the Hwange machine is rolling on after Newman Sianchali gave the hosts a slender 1-0 win over Chapungu.
That was enough to push the coalminers into seventh place with 36 points, the same as Harare City who drew 0-0 against Dynamos at Rufaro.
At Gibbo, Kelvin Kaindu is having no joy at Triangle.
He saw his charges thumped 3-0 by relegation candidates Flame Lily.
Moses Demera gave the visitors the lead after six minutes before Vimbai Makado added the second 10 minutes later.
It was 3-0 after 77 minutes as James Chivasa made it safe for the Harare side.
Advertisement