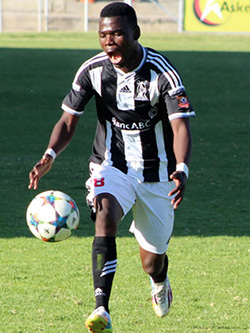 HIGHLANDERS will be looking for their first win under new coaches Cosmas Zulu and Amin Soma Phiri when they engage Flame Lily in a Castle Premiership match on Thursday at Barbourfields Stadium in Bulawayo.
Zulu, who is the technical advisor and Phiri, the interim head coach, took over from Bongani Mafu who was dismissed two weeks ago for poor results.
Highlanders are 10th on the log standings with 25 points from 22 games and are desperate for a quick turn-around, if they are to avoid relegation.
But even if they pick up maximum points on Thursday afternoon, they will remain in the same position but with 28 points as Hwange are still on 30 after going down 1-0 to Caps United on Wednesday at the Colliery.
Last Saturday, the ailing Bulawayo giants were floored 1-0 by Harare City at Rufaro conceding after just three minutes and failing on the fightback, but Soma Phiri believes the boys did well.
“We played very well in that match and the boys are quickly adopting to my style of play,” he said.
“We need to work on our weak areas for this match and I am sure we will come right very soon. I believe in possession football, speedy recovery if one loses the ball and intense
attacking.”
He added: “If we can win tomorrow (Thursday), then that will give us more confidence in the next matches especially against Caps United in Harare.
“We have eight matches to play and if we get five wins, we will be fine. It’s an embarrassing position we are in on the log and this is not Highlanders at all.”
Bosso will welcome leading marksman Knox Mutizwa, who has 10 goals this season, Teenage Hadebe and Nqobizitha Masuku from Young Warriors duty.
The trio has been taking part in the African Games in Congo-Brazaville and could be thrown into the deep end to try and salvage Bosso’s season.
New team skipper and veteran striker Obadiah Tarumbwa has been in fine form of late and needs to lead from the front. In the reverse fixture, Bosso thumped Lily 3-0 at Larfarge.
Wednesday Results: Triangle 1-2 Chicken Inn, How Mine 0-3 FC Platinum, Dynamos 5-1 Whawha, Hwange 0-1 Caps United, Chapungu 2-1 Tsholotsho
Thursday fixtures: Highlanders vs Flame Lily (Barbourfields), Buffaloes vs Dongo Sawmill (Sakubva)Advertisement