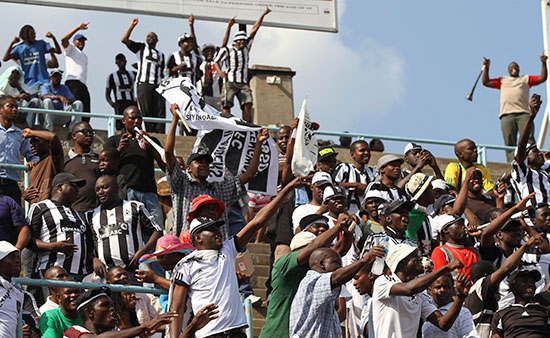 Highlanders 1-0 How Mine
THOMAS Chideu scored for Highlanders just after five minutes as the Bulawayo giants set up a final against bitter rivals Dynamos after edging How Mine in a tightly contested semi-final at Barbourfields Stadium on Sunday.
Chideu, who is also part of the Kalisto Pasuwa’s Young Warriors squad that faces Cameroon in the All Africa Games qualifier this Sunday, tapped in a cross past goalkeeper Donovan Bernard after veteran striker Obadiah Tarumbwa ran  in unmarked on the right wing.
Dynamos beat Caps United 2-1 in the other semi-final at Rufaro Stadium through goals from Patrick Khumbula (six minutes) and Felix Opoku (17 minutes) while the Green Machine pulled one back from former Bosso midfielder Hillary Madzivanyika on the half hour.
Bosso coach made changes to the team that lost 2-1 to Caps United in the Bob91 Super Cup play off and started off with second choice goalkeeper Njabulo Nyoni while Chideu partnered Tarumbwa upfront with Gabriel Nyoni playing behind them.
New skipper Felix Chindungwe played in the heart of defence with the towering Doug Sibanda while Nqobizitha Masuku played as anchor.
How Mine coach Luke Masomere played former Bosso stars Charles Sibanda, who lasted 66 minutes and made no impact before he was taken off for Kuda Musharu, and Mgcini Sibanda.
Musharu almost levelled in the 70th minute when Honest Moyo and Doug Sibanda failed to clear inside the box, but hit the side netting.
Highlanders could have made the game safe late but Mudzingwa’s header crashed against the cross bar with Bernard beaten.Advertisement