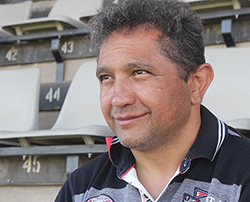 HIGHLANDERS seem to have settled for Dutchman Erol Akbay as their new head coach for the 2016 season, on a renewable one year contract.
The Dutchman arrived in the country last week and briefly took charge of the Highlanders Under-19 training session at Crescent Sports Club.
The team has been promoted to the Southern Region Division One league after winning the 20915 second tier league title.
The 49-year-old also watched Highlanders beat Buffaloes 1-0 on Sunday at Barbourfields Stadium-a win that saw Bosso move to 35 points, ninth place and virtual safety from relegation.
He then met the Highlanders bosses on Monday to seal his deal but club chief executive officer, Ndumiso Gumede was non-committal saying he was yet to present a report to his bosses on the coach’s interview.
“He was here for an interview. His tickets to fly into the country for the interview were organised by a benefactor, who is not (Makokoba legislator) Tshinga Dube,” Gumede said.
“We had an interview with him on Thursday last week and on Friday, he had a mock session with our Under-19s. Those two (the interview and the training session) are going to be taken into account.
“In front of me right now, I have the report from the interviewing panel which I will be tabling today (yesterday) at our 5pm meeting.”
Sources though indicated that a deal had been signed and the only sticking point was that of the assistant coach.
Akbay wanted his own man but Bosso said they were cash-strapped and a local would instead be appointed, most probably a former coach.
The Dutchman comes after serious lobbying from Dube, the club’s long time benefactor and it is believed he will view his new house in Bulawayo’s low density suburb of Sunninghill before flying out via South Africa on Tuesday to await the processing of his work permit.
Dube, sources said, has also provided a car for the coach’s use and the Bosso board and executive was left with no choice as some of the major expenses have been taken care of.
Other foreign coaches who have submitted their CVs to Highlanders include former Warriors and Nigeria coach Clemens Westerhof and Hendrik Pieter de Jong, both Dutch, with the latter based in Kenya.
Former Caps United coach Mark Harrison, now in Botswana with Township Rollers, also submitted his CV together with Scotsman Des Bulpin, Zambian Dean Mwende, Ethiopian Anteneh Eshete, Malawian Kinnah Phiri and American Jeff Cook.Advertisement

Bulpin was set to be appointed as coach early in the year, but Bosso settled for Bongani Mafu who was fired two months ago for poor results.
Mafu, then considered a cheap option, is now an assistant coach at Tsholotsho.
He was replaced by Amin Soma-Phiri on an interim basis until the end of the season