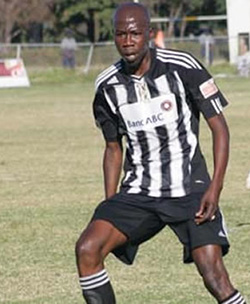 HIGHLANDERS midfielder, Mthulisi Maphosa, has been sentenced to 75 hours of community service after being convicted of assaulting a girlfriend and her friend in Bulawayo.
Maphosa, who spent the whole of last week in the courts, surprisingly started for Highlanders as they were bashed 4-0 by Caps United at the National Sports Stadium in Harare on Sunday.
A day after the Harare humiliation, he appeared before Western Commonage magistrate Tancy Dube accused of bashing his girlfriend Nobuhle Nkomo, her friend Amanda Mbuisa and her boyfriend Bongani Rabvu in Mpopoma early this month.
Maphosa accused Mbuisa of being a bad influence on Nkomo. Mbuisa is at the centre of a storm in Bulawayo where she is being accused of providing sexual favours to half of the Highlanders team.
The former Warriors midfielder is no stranger to the courts having being fined for stabbing a soldier, beating up his mother and patrons at a sports bar in Mpopoma in the last two years.Advertisement