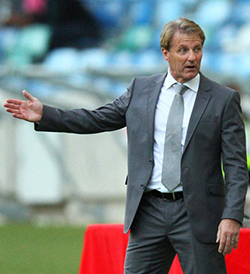 BULAWAYO giants Highlanders could lose yet another squad member with Hilary Muradzikwa being the latest player to join Caps United at training with the hope of landing a contract.
Muradzikwa took part in last Thursday’s training at RBZ Sports Club but Caps United coach Mark Harrison was quick to state that he was merely assessing him.
“There is nothing much at the moment, I am just assessing him. The same goes for Josta. He is on assessment,” said Harrison.
The English coach however, expressed concern with Ngodzo’s fitness level.
“Ngodzo is unfit. He has not been training and has to work hard. I am still monitoring him,” said Harrison.
The former FC Platinum midfielder has been training with Caps United the whole of lasts week with club president Twine Phiri saying they will offer him a two year deal.
If both players are signed as is likely, they will reunite with their former boss at Highlanders Mark Mathe, who has joined the Caps United technical bench as one of the assistant coaches.Advertisement