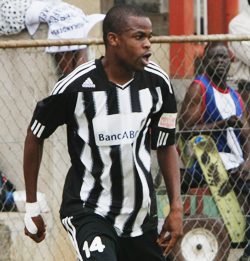 Black Rhinos 0-3 Highlanders
Masimba Mambare scored twice as Highlanders ran out comfortable 3-0 winners over Black Rhinos in Kadoma on Sunday to maintain top spot in the Castle Later Premier Soccer League.
The 2006 champions got their opener from Njabulo Ncube in the 41st minute before Mambare’s double in the 55th and 78th minute.
The win ensured they stay top with 47 points, two ahead of Dynamos who finally remembered how to win after thrashing Tripple B 4-0 at Rufaro.
Harare City also stayed in the hunt after beating How Mine 0-1 at Luveve while FC Platinum fell 1-2 to Triangle.
But it was at Rimuka Stadium where Highlanders re-wrote the history books as Rhinos had not lost or conceded a goal since their move to Kadoma in July.
The visitors made things look easy four minutes from the break as Soccer Star of the Year favourite Bruce Kangwa’s cross evaded the Rhinos defence allowing the bustling Ncube to sneak in the opener.
Ten minutes after the break, Mambare finished off a cool move from inform midfielder Mthulisi Maphosa.
The Warriors captain then made it safe in the 78th minute when he turned home a short Beaver Chikaka pass in the box.
Shabanie Mine had to come from behind to force a 1-1 draw against Monomotapa at Maglas on Sunday.
On Saturday, Hwange stunned contenders Chicken Inn 2-1 with Warriors defender Eric Chippa, who had earlier missed a penalty, scoring a stunning long range effort for the three points.
That left Hwange on 32 points and needing just five points from their remaining five matches to guarantee safety.
Weekend Results
Saturday: Black Mambas 4-1 Caps United, Hwange 2-1 Chicken Inn
Sunday: Dynamos 4-0 Tripple B, Black Rhinos 0-4 Highlanders, How Mine 0-1 Harare City, FC Platinum 1-2 to Triangle.