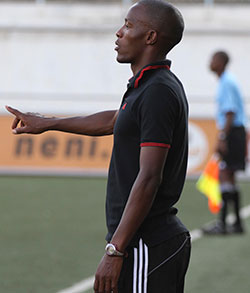 HIGHLANDERS are still in with a chance to win the Castle Lager Premiership title going into the last matches of the championship on Sunday.
Bosso have to win their last game at home to Shabanie Mine and hope fate deals favourably with their title rivals.
Sunday’s 4-0 loss to Harare City, their worst in almost four years, left them on third position with 90 minutes still left to play.
They trail the Sunshine City Boys by two points and with a home tie against Shabanie Mine, Bosso could still be champions provided Harare City lose to Caps United or draw with Black Mambas holding Dynamos.
Next weekend promises fireworks especially among the top three clubs.
Caps United, who entertain Harare City, could earn themselves a top four finish with a win that could take their tally to 51 points.
Twine Phiri would certainly love to celebrate a win over a team chaired by a man most likely to take over as PSL boss next year, Leslie Gwindi – a firebrand who has proven his worth in football before.
Gwindi took Dynamos to the Champions League final in 1997. He went on to have a good spell with the PSL as secretary-general where he made a name for himself by refusing to be bullied by Zifa on policy issues.
Winning the championship with Harare City would be another feather in his administrative cap.
Caps United would also want to end a tumultuous season with a win against one of the season’s best performers.
Makepekepe have been besieged by in-house problems and funding challenges and a win to finish fourth if FC Platinum lose their last game, would see them earn the last seeding place in the BancABC Sup8r Cup next season.
Even if they win, Harare City will certainly not get it on a silver platter.
Black Mambas are not yet safe from relegation and play their last match against Dynamos at Rufaro Stadium on Sunday. The police outfit have a bigger stake to fight for – which is staying in the Premiership and are expected to make life difficult for Dynamos.
They are expected to give a good fight and retain their PSL berth as a loss could make them the fourth team to go to Division One in a year Harare has lost its grip in the Premiership with two teams already relegated.
Shabanie Mine, Highlanders’ opponents at Barbourfields Stadium next Sunday, beat Triangle 2-0 to leap to safety in the Premiership with 40 points. Their biggest hurdle was yesterday and not much is expected of their resilience against a league and cup double chasing Highlanders.Advertisement

Highlanders still have a strong chance of scooping the Castle Lager honours and now it’s up to the coaches and players to rise to it.
The match against Shabanie Mine will decide whether the coaches and a majority of players are staying or not in next season as fans are fed up with being second best.
It is not good for the coaches and players resumes nor is it for the executive as all will be judged with success on the pitch.
Sunday will be a day of reckoning for the players as they seek to prove that they deserve another year or a longer period at Highlanders.
Having good personalities is not what people are judged for but silverware and these six days will be crucial to getting the act right.