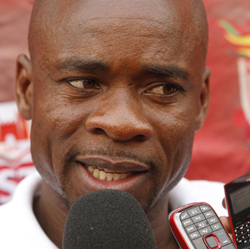 HIGHLANDERS toppled FC Platinum from the summit of the Premier League table on Sunday with a commanding 3-0 win over Buffaloes at Barbourfields.
Platinum, 1-0 winners over Tripple B at Mandava on Saturday, are level with the Bulawayo club on 19 points but Kevin Kaindu’s men now have a better goal difference.
Highlanders got a huge helping hand for their opener as Buffaloes skipper Petros Matizanadzo beat his own keeper in an attempt to clear a Masimba Mambare delivery from the right six minutes before the break.
Mthulisi Maphosa doubled their lead on 54 minutes before Milton Ncube curled in a third six minutes from time for a comprehensive win.
Champions Dynamos picked up only their second win of the campaign at Rufaro with a comfortable 3-0 victory over Monomotapa.
Washington Pakamisa, so reliable for Dynamos in front of goal this season, again stole the limelight with a brace after Twanda Muparati had given them the lead six minutes into the contest.
Callisto Pasuwa challenged his men, who remain undefeated this season although they trail the leading pair by seven points, to kick on and build up some momentum.
At the Colliery, Hwange suffered a surprise home defeat as Gerald Ndlovu beat his own keeper in the dying seconds of the match to give Triangle maximum points.
At Gwanzura, Menard Mupera and Simba Sithole scored in each half as How Mine edged Black Rhinos 2-1 to go fourth.

Clemence Matawu and Misheck Mburay were both on the score sheet as Motor Action comfortably beat Black Mambas 2-0.
On Saturday, Platinum – who meet Highlanders this weekend – had opened a three-point lead at the top with a battling victory over Beitbridge side Tripple B.
Substitute Mitchelle Katsvairo rescued Tennant Chilumba’s men with a late strike which appeared rather cruel on Friday Phiri’s men who appeared on course to earn a valuable point.
It was Tripple B’s third match on the trot at Mandava after being made to play their home matches against Dynamos and Highlanders in Zvishavane because Dulibadzimu Stadium was ruled too small.
CAPS United lost to Shabanie Mine 3-2 at Gwanzura. Leonard Fiyado struck a double for the home side but Luke Masomere’s travellers responded with goals from double scorer Caleb Masocha and Farai Mususunye.Advertisement