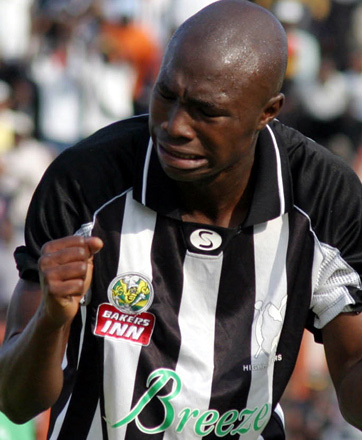 Flame Lilly 0-3 Highlanders
HIGHLANDERS might have struggled for fluency since the start of the campaign but on Wednesday they made a huge statement of their ambitions with the 3-0 defeat of Flame Lilly which lifted them to fourth position on the league table.
The victory – their fourth of the campaign took Bosso’s points tally to 13.
Zimbabwe Under-23 striker Thomas Chideu opened the floodgates on 23 minutes, breaching the Flame Lilly’s defence to beat goalkeeper Lloyd Majaira with a low ground shot.
But Flame Lilly threatened with their dangerous raids from Moses Demera and Macmillian Chigora and Highlanders had Ariel Sibanda to thank as he saved most of their raids.
Highlanders appeared to struggle for control on the bumpy pitch while the home team looked comfortable on the ball.
However, Gabriel Nyoni added the second after coming on as a second half substitute on 54 minutes for the injured Nqobizitha Masuku, when he connected a free kick by veteran striker Obediah Tarumbwa with his first touch of the ball.
Flame Lilly tried to hit back in the 59th minute but Demera missed a headed opportunity from a free kick by skipper Gift Phiri as Sibanda did well to palm it away.
Despite their relentless attack, goals were stubbornly elusive with Bosso keeper Sibanda thwarting most of their raids.
But Tarumbwa killed off the contest with a brilliant solo run before smashing the ball past an advancing goalkeeper Majaira.
Highlanders had come into the match under pressure to win after their 1-0 defeat to Caps United and assistant coach Mandla Mpofu was naturally pleased with the victory.
“We came into this match under pressure to win after our defeat to Caps United. We are happy with the attitude from the players.
“From the onset we were on top, creating opportunities. What is important now is the home tie against Harare City but this victory is a great motivator,” said Mpofu.
His opposite number, Nesbert Saruchera blamed the defeat on his defence.
“We were let down by the defence. We didn’t defend very well as we should do.
“We gave away all those goals but we created a lot of chances which we could have scored, maybe it was just not our day,” said Saruchera.
FIXTURESAdvertisement