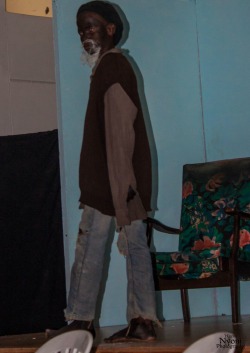 TEATRE for Everyone’s Untikolotshi stage play that left audiences in stitches when it premiered at Bulawayo’s National Gallery is set for Harare’s Theatre in The Park.
The play will run from the 6th to the 8th of July and this will be the second performance of the play.
Untikolotshi becomes the third Bulawayo play to be shown at the Park after the successful run of The Taking and Tension from Home grown Arts Theatre production house since the new venue opened its doors in March.
The play is packed with suspense, twist and turns that keeps the viewers intrigued, entertained with eyes glued on the stage.
It was written by Nonhlalo Dube during British Council and Royal Court Playwriting program in 2014 and is directed by Styx Mhlanga. The play is co-produced by Theatre in the Park and Theatre for Everyone
Untikolotshi, an Ndebele word for goblin, is the story of a young girl who refuses to name the father of her baby. She gets miserable as the goblin continues to threaten and abuse her. Finally, she confesses who the father of the baby is and her father takes it upon himself to deal with the goblin.
The cast consists of high riding Fortune ‘Folomani’ Ruzungunde, Tsitsi Gumbo, Nomvuyiso Mabi, Greatjoy Hlatshwayo, Buhlebenkosi Maphosa, John Mabuyane and Primrose Ndlovu.
According to Nonhlalo Dube, Theatre for Everyone is a monthly program that intends to build up theatre audience attendance whilst a creating a marketable, sustainable and support worthy industry.
“Taking this play to Theatre in The Park is a good opportunity for the actors, especially for the upcoming, as it will give them exposure and a chance to perform outside the city of Bulawayo.
“This is also a beginning of a relationship between us and Theatre in the park,” said Dube.