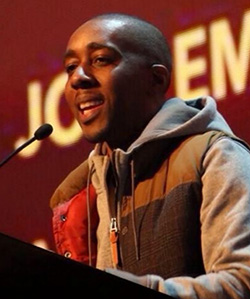 DRAZE is a Seattle born and raised hip hop artist turned community activist, raised in the Central district by immigrants from Zimbabwe.
Troubled partially by the gentrification of classically African American neighborhoods, his goal for 2017 is to inspire 100 new African-American owned businesses in Seattle.
“I don’t think it takes a rocket scientist to figure out that, for minorities, this might be a challenging term based on our president. Right now, specifically for African Americans, we need to focus on how to build our economy.
“How do we build our community? Our communities are hit really, really hard by gentrification and the ways we can change that and begin to turn the tide is by investing in entrepreneurialism. African American businesses not only need to be launched but they need to be supported by people of all different races.
“What we know, factually, is that people tend to hire within their own race in this country. The only way we’re going to be able to get good paying jobs, no one wants to just work at McDonald’s. People want to own businesses, people want to own homes.”

Draze is planning a summit for this summer, to connect people and provide tangible advice on how to open a business.
“Specifically I am partnering with businesses like Ezell’s Chicken, I’m partnering with Africatown. All of these strong businesses and organizations in our community, all focused on black business, launching black business. We’re going to try and educate people on marketing. The idea of having a dream or an idea and how do you take that step.”
Draze is also a proponent of black people supporting black businesses. Which sometimes sparks some questions.
“I had the opportunity to go speak at the University of Washington. About 150 students. I love young people and they’re challenging me and they’re going, ‘Isn’t this idea of supporting black businesses kind of separatist?’ Or, ‘Is it segregation?’  I said, ‘Well, can you guys name me three black owned business in the state of Washington?’ They could not name me three. They named me one! Ezell’s Chicken,” Draze laughs.Advertisement

“So I challenged them and I said, ‘If you don’t know our businesses how can you support them?’ And of course it was dead silence. After that I said, ‘If you’re not supporting them, how can you be angry or frustrated with me for challenging African Americans to support their own businesses?’ At this point, us supporting our businesses is a matter of survival.
“Our community can not and will not survive if we continue to give our money away. I recently heard a stat that I believe it’s $1.2 trillion is the amount of money that African Americans spend in this country every single year. So we have the money. We’re giving the money away to all these other communities and it’s not coming back to our own.”