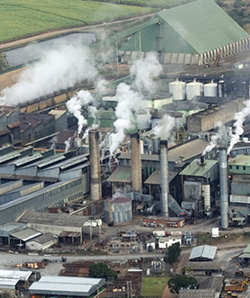 HARARE: Hippo Valley Estates, the local unit of South African sugar processor Tongaat Hulett says it anticipates production levels to recover on the completion of Tokwe Mukosi dam which is expected to be operational in time for the rainy season.
Earlier this year, Hippo reported a 10 percent decline in annual production due to restricted irrigation and a drop in sugarcane yields. The low production volumes pushed the company to an after tax loss of $8, 5 million in the full-year to March from a profit position of $7, 3 million previously.
“The out turn for next year will reflect some improvement. From a production estimate we will produce between 180,000 and 220,000 tonnes of sugar,” chief executive Sydney Mtsambiwa told reporters at the company’s annual general meeting on Tuesday.
Total industry sugar production for the 2016/17 season is estimated between 379,000 tonnes and 440,000 tonnes.
“Having experienced a couple of hiccups, the main contractor subsequently moved back to site to date all the expected works are in progress and we anticipate that the dam will be completed by the beginning of next raining season… it is anticipated that the dam will impound water during the 2016/17 rainy season, further mitigating irrigation water risk,” said Mtsambiwa.
Construction of Tokwe-Mukosi, in Chivi, Masvingo province, began back in 1998 but work has progressed slowly because of funding constraints. The Italian constructor, Salini Impregilio then moved out of site in 2014 but returned in May to complete the works after government released $35 million.
With storage capacity of 1,8 billion cubic metres, the dam will have the potential to irrigate over 25,000 hectares.Advertisement