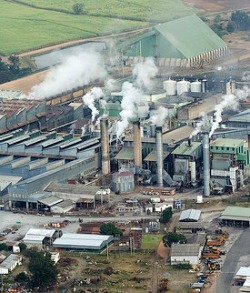 ZIMBABWE’S sugar exports to the European Union (EU) totalled 202,000 tons in the year to March, while supplies to the domestic market topped 247,000 tons, boosting revenue at Tongaat Hulett’s local unit, Hippo Valley.
Revenue jumped 35% to $174.2m, boosted by “an increase in sugar production and the resultant increased sales volumes”. This was after sugar production at the company’s estates increased 34% to 228,000 tons.
A total of 1.9 million tons of cane was crushed during the season. Of this, Hippo Valley supplied 1.1-million tons while private growers supplied 805,369 tons.
But despite growing output and revenue, earnings per share for the period dropped by 3.8 US cents.
Hippo Valley said that it has net debt of $37.9m, a significant increase from the prior year’s $32.8m. It incurred $6.8m in finance costs during the period under review.
The company also recorded a decline in operating profits to $23.4m for the period, a significant decline from the previous year’s $32.4m.
After-tax profit for the year declined to $13.6m from $20.9m. “As a consequence of the decrease in profit after tax, earnings per share dropped to 7.1c from 10.9c achieved in the prior year,” the company said.
Hippo Valley did not declare a dividend for the period
Domestic market sales by Zimbabwean sugar producers totalled 258,000 tons compared with 247,000 tons the previous year. Exports to the EU, under existing preferential market arrangements, amounted to 202,000 tons.
Hippo Valley is forging ahead with an ambitious private farmer sugar cane rehabilitation programme aimed at boosting sugar production capacity in the country. Under it, about 2,340ha of land was planted during the year to March.
The total area planted since inception of the rehabilitation programme in the 2010-11 season is now 8,604ha.
Collectively, private farmers delivered 852,915 tons of cane during the season just ended, a 60% increase from last season’s deliveries of 531,990 tons.
Local sugar farmers are expecting to produce about 460,000 tons of sugar during the season to March next year.
Hippo Valley has projected that it will produce about 222,000 tons of the projected industry-wide output.
South Africa-based Tongaat Hulett controls 50.3% of Zimbabwe Stock Exchange-listed Hippo Valley.
Tongaat Hulett CEO Peter Staude has said the company plans “to stay in the country for a long time”. There has been concern that it could lose its Zimbabwe business following alleged noncompliance with the indigenisation policy.Advertisement

Tongaat’s two operations in Zimbabwe employ 18,000 people and are considered important to the recovery, growth and expansion phase the country is undergoing.
The company reported last Friday a 15% increase in diluted headline earnings per share to 942.3c in the year ended March.