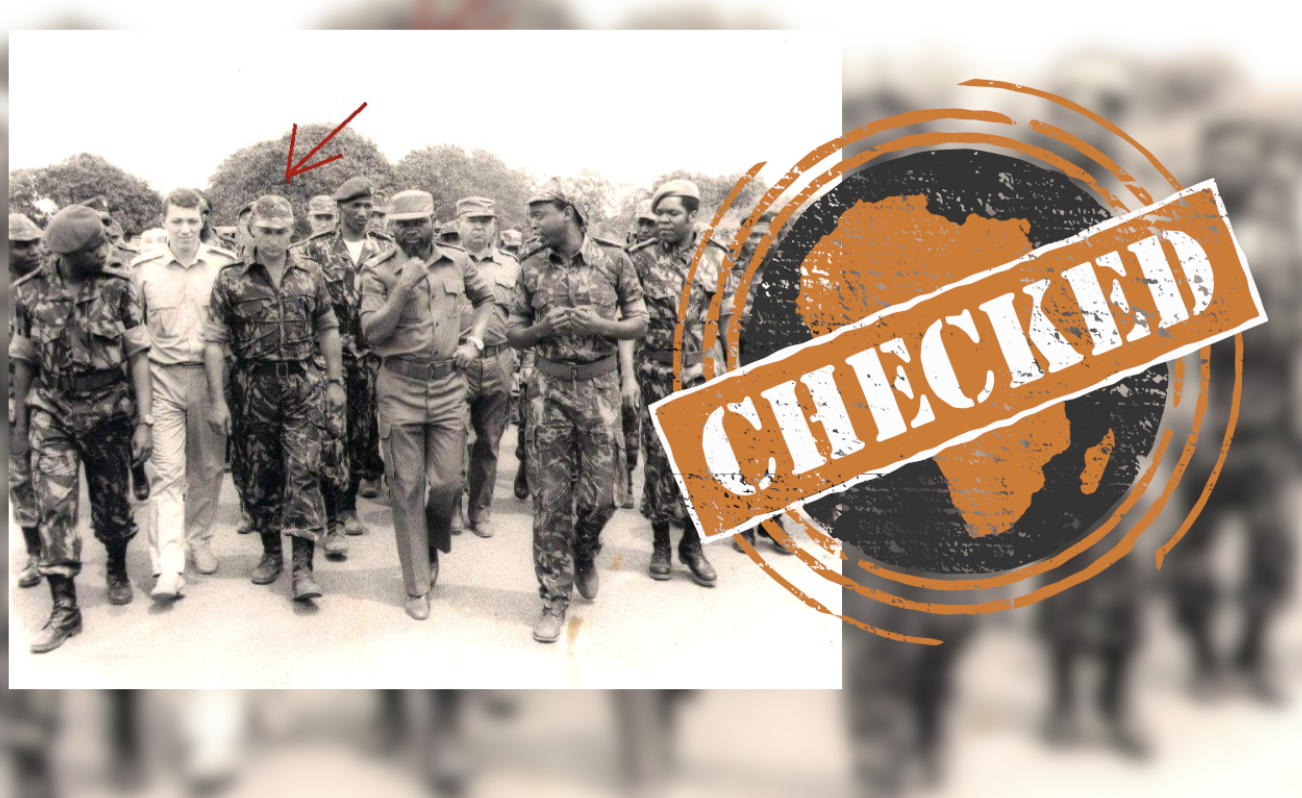 That’s the claim in a viral graphic that a Twitter user asked us to verify. The graphic includes a low-quality black and white photo of a group of men in military uniforms. In the middle is a man the graphic says is Samora Machel. To his left is another identified as Vladimir Putin while the man to Machel’s right is said to be Mnangagwa.

I did a reverse image search hoping to quickly find a clear-cut answer. Instead I found myself doing a historical deep dive into a rather complicated claim.

Does the photo show Putin with Machel and Mnangagwa? And did the Russian leader train freedom fighters in Tanzania for four years in the early 1970s?

Graphic doing the rounds for years

The claim has been circulating on websites and social media since at least 2018.

The earliest instance of the photo I found was in an October 2016 post on JamiiForums, a popular Tanzanian discussion forum. It claimed the photo showed Putin visiting African countries in the 1980s.

Other publications expanded on it. The Zimbabwean website iHarare claimed the photo was taken in the Tanzanian town of Kaole, near Bagamoyo. Tanzania Times further claimed Putin was a “KGB boss” who trained African freedom fighters between 1973 and 1977.

The Komitet Gosudarstvennoy Bezopasnosti or KGB was a foreign intelligence and domestic security agency of the Soviet Union.

The photo and its associated claim resurfaced online after Russia launched a full-scale invasion of Ukraine in late February 2022.

Opera News, a website that is widely read in Africa, republished the claim on 27 February. An opinion piece argued that Africans should support Russia in the war because Putin had trained freedom fighters from South Africa, Mozambique and other neighbouring countries to “stand against Western bullies”.

We don’t usually fact-check opinion pieces, but when they’re based on claims that don’t seem to be verified we need to ask questions.

It’s important to note that both Russia and Ukraine formed part of the Union of Soviet Socialist Republics, better known as the USSR or Soviet Union, until it collapsed in 1991. The USSR also provided military aid to resistance movements in African countries.

While a reverse image search didn’t provide any clues on the origin of the photo, I was able to find a better quality version of it.

The man in the middle does appear to be Samora Machel. A few comparisons with other photos of Machel in the 1970s match him to the man in the photo.

Machel joined the Front for the Liberation of Mozambique, known as Frelimo, in 1962. Frelimo fought to liberate Mozambique from Portuguese colonial rule and came to power with independence in 1975. Machel, the commander and chief of the Frelimo army, was independent Mozambique’s first president.

Frelimo’s headquarters were in Bagamoyo, Tanzania. They included a training camp in Nachingwea, southern Tanzania, which had Chinese instructors. Machel met his wife Graça Machel in Tanzania in 1973 and there are photos of him there, indicating he plausibly could have been in Tanzania at the time the photo was taken.

But the timeline is off. Paul Fauvert is the editor of the Mozambique News Agency’s English service. He said Frelimo soldiers were trained by Chinese instructors, not Soviets.

“After the collapse of fascism in Portugal, and the signing of the Lusaka agreement on Mozambican independence [on] 7 September 1974, all the Frelimo guerrillas left Tanzania and went back to Mozambique. So who was Putin supposed to be training between 1974 and 1977?” he said.

… but Mnangagwa and Putin’s timelines don’t match the photo

The timeline also doesn’t add up for Zimbabwean president Mnangagwa. Mnangagwa was recruited into the Zimbabwe African People’s Union, or Zapu, in 1962. There is also evidence that in 1963 he passed through the Frelimo headquarters in Tanzania. But he was arrested in 1965 and given a 10-year sentence for sabotage, so he would have been in prison when the photo was taken.

Fauvet added that the man to the right of Machel bears a “passing resemblance” to Antonio Hama Thai, a senior Frelimo commander.

So Mnangagwa isn’t in the photo, but what about Putin? I reached out to Dr Vladimir Shubin who was secretary of the Soviet Afro-Asian Solidarity Committee, the Soviet state organisation that facilitated support for African revolutionary movements. He told me that the claims in the graphic were “nonsense”.

According to biographies of Putin, he graduated from Leningrad State University with a law degree in 1975. This means he was in the USSR at the time the graphic claims he was training soldiers in Tanzania.

Dr Natasha Telepneva is a lecturer at the University of Strathclyde Glasgow and an expert on the history of both the Soviet Union during the Cold War and socialism in Africa. She said that while she could not verify the photo, she had “serious reservations” about the graphic’s claims.

“Putin joined the KGB only in 1975, first working in Leningrad before being transferred to East Germany in the 1980s,” she said.

Telepneva added that even if the photo was taken later, Putin was part of the KGB. Those who trained African liberation movements were mainly part of a different military intelligence branch called the Glavnoye Razvedyvatelnoye Upravlenie or GRU. The GRU had no formal connection to the KGB.

There are other red flags in the photo. While the man identified as Putin resembles modern-day Putin, the Russian leader was born in Leningrad, today’s St Petersburg, in 1952. This means he would have been 21 years old when the photo was taken. I thought the man in the photo looked quite a bit older than 21 and Telepneva agreed, adding that he “does not really look all that similar to the young Putin”.

I also managed to find a few photos of Putin in his early 20s, which show that he looked noticeably younger than the man in the photo.

I finally reached out to Dr Luca Bussotti, an associate researcher at the Centro de Estudos Internacionais  – Instituto Universitário de Lisboa and an expert in Lusophone African politics and history. He was able to offer some additional clues to the photo’s origins.

Bussotti said his contacts had told him the photo was taken in Mozambique in 1986, just days before Machel and 24 others died in a plane crash on 19 October.

“The supposed person identified as Putin is a Soviet agent of [the] KGB,” he said. “His presence is due to the fact that the USSR had doubts on the loyalty of Samora, because of his travel [to] the States and his meeting with Reagan.”

Machel had met US president Ronald Reagan on 19 September 1985 to strengthen relations between the US and Mozambique. I wasn’t able to find other evidence of Machel’s meeting with the Soviets, but this is the most credible explanation I’ve gotten so far.

So could the KGB officer be Putin after all? Still no. All the experts I contacted confirmed that Putin was stationed in East Germany at the time  and there is no record of him going to Tanzania.