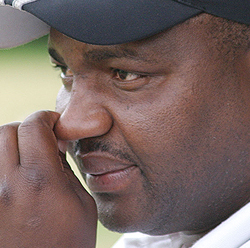 Black Mambas 1-0 Highlanders
HIGHLANDERS fans turned their wrath on team manager Willard Khumalo after a late Black Mambas goal at Morris Depot condemned them to their fifth defeat of the season on Thursday.
Paul Marazanye’s strike at the stroke of full time was seconds apart from Sydney Linyama’s goal across town at Rufaro which helped Highlanders’ title rivals, Dynamos, to leapfrog them and claim second spot on the Premier League table.
The presence of the Highlanders and Zimbabwe legend has been a source of discontent at Highlanders since the start of the season and has been attributed to the club’s failure to find consistency in the title race.
As the final whistle went seconds after the Mambas goal, Highlanders fans congregated behind the dug-out and hurled abuse at Khumalo, even as coach Kelvin Kaindu appealed for restraint.
Club vice chairman Mgcini Sibhalo Mpofu, treasurer Jerry Sibanda and committee member Charles Moyo, who watched the match at Morris Depot, were at pains to calm down the fans.
Chances were few and far between in the contest. Highlanders’ Milton Ncube had two free kicks saved by Mambas goalkeeper Tonderai Mateyaunga in the 25th and 37th minute.
Joseph Mutambiramwa tested Highlanders shot stopper Munyaradzi Diya shortly before half time.
The second half again brought few chances for both teams, but Highlanders will feel aggrieved after their penalty appeals from a Marazanye handball in the box on 75 minutes were waved away.
Marazanye would punish Highlanders’ lack of concentration with a poacher’s goal in the dying seconds of the match to ease Mambas’ relegation worries.
In other matches, Shabanie Mine beat Buffaloes 2-0a t Maglas Stadium to move seventh with 27 points.
Fungai Chirinda opened the scoring eight minutes into the match before Pervington Zimunya sealed a fine afternoon from the penalty spot on 55 minutes.
At Gibbo Stadium, Triangle threw away a 2-0 first half lead courtesy of goals from Charles Makoto and Lameck Nhamo to draw 2-2 against Black Rhinos. Phillip Marufu brought the soldiers back into the game in the 47th minute before Lot Chiunga struck the all important equaliser in the 89th minute.