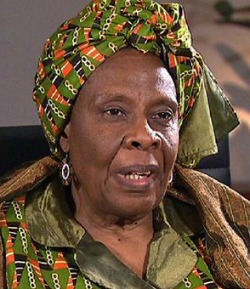 SEKAI Holland is an amazing and inspiring character. Turning 71 this year, she remains energetic, positive and very optimistic about the future of Zimbabwe.
In March 2007, one of the darkest eras of our political history, Sekai Holland, together with Morgan Tsvangirai, Grace Kwinjeh and Nelson Chamisa, were severely tortured by the brutal regime after attending a peace prayer meeting. It was this very dark hour that became a crucial turning point for the MDC after suffering the Welsman Ncube-led split of 2005. Images of swollen faces, bruised and disfigured bodies went viral across the world earning the regime instant international condemnation.
Those who were used as instruments of this gross human rights violation, if they are still alive, must be hanging their heads with shame! A young and intoxicated security officer who assaults an innocent, defenceless and peace-loving grandmother such as Sekai Holland is the one who has no respect for humanity nor African values.
For months, Sekai could not walk without special aid and up to this day, she bears physical scars that may never heal. But did this break her heart or soul? Certainly no! If anything, it made her the strong, caring and forgiving character that she is today. Such ability to forgive is of biblical proportions. What a survivor!
In the 1960s and 70s, Sekai made an immense contribution to the liberation struggle as Zanu’s official representative to Australasia when she was a young student in Australia. It was during this time that she met her husband, Jim Holland. Later, Sekai also lived in Zambia where she continued her fight and campaign for democracy, human rights, social justice and empowerment of women. She has been unwavering ever since.
At independence, Dr Holland returned home and continued her good fight for humanity. You only need to visit her humble Harare home and see the numerous orphans and abandoned children she and her husband look after, to understand her better.
In 1999, true to form, she became a founder member of the MDC, confirming that she did not have permanent friends but interests for which she had been fighting for many years.
Thirty-four years on, her former university, The University of Technology, Sydney (UTS) recognised her distinguished and selfless contribution to social justice and decided to honour her with an Honorary Doctor of Letters. Indeed, a befitting award for this illustrious fighter and grandmother.Advertisement

Listening to her on October 1, 2013 delivering a public lecture on The Way Forward for Zimbabwe, one could not help but cherish and admire this great daughter of the soil. The absence of bitterness in her electric address warmed the diversified audience. While some could be seen wiping a tear, Sekai was all smiles and full of jokes.
I just don’t know where she gets her courage from! She took the audience down memory lane, from the 60s all the way to the electoral drama of July 31. She never deviated from the thrust of her message which was peace and reconciliation. She even repeated the organ slogan “peace begins with me, peace begins with you, peace begins with us.”
Sekai strongly believes that our society is going through irreversible transformation. Despite the contentious elections of July 31, she envisages a Zimbabwe that will, one day, be truly democratic, peaceful and prosperous. She says the journey has just started and nothing will stop it despite some stumbling blocks on the way.
A new constitution coupled with a relatively peaceful election are some of the early pointers, according to her, of the transformative agenda. She challenged those that are pessimistic to reflect seriously on Zimbabwe’s protracted history of violence and oppression dating back to Ian Smith’s time. She says she would like to see her grandchildren living in a totally emancipated and peaceful Zimbabwe so she will not stop working towards creation of this environment for as long as she lives.
On whether Zanu PF might totally destroy or swallow the MDC, Sekai Holland gives the analogy of a python that attracts, encircles and swallows its prey but says the day that the python swallows an animal that is too big for its stomach is the day it will die. She joins Nelson Mandela and Ang San Suu Kyi in receiving this prestigious award. Amhlope, Congratulations, Makorokoto Dr Sekai Masikana Holland.
Moses Chamboko writes in his personal capacity and can be contacted at chambokom@gmail.com