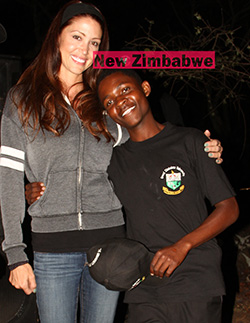 US actress and model Shannon Elizabeth who starred in a block buster movies American Pie was in Masvingo early this week on a familiarisation tour of Zimbabwe’s animal sanctuaries.
She is expected to be in the country until the end of the month.
Shannon vised Kyle Recreational Park as part of an international delegation of animal conservationists, veterinarians from the Animal and Wildlife Area Research and Rehabilitation (AWARE).
Kyle Recreational Park hosted a private party for the visiting friends of Kyle and Great Zimbabwe University Students studying culture and heritage provided the guests with entertainment.
The 42-year-old expressed her love for nature and Zimbabwe as she said she will be in the country until the end of September touring local conservatives and assessing the possibilities of extending her animal charity work in Zimbabwe.
According to her official website www.shannonelizabeth.com, the actress said as of the beginning of September she has remarked an online fundraising project towards the purchase of a solar powered pump for Hwange National Park among other animal charity work in Southern Africa. The initiative has so far managed to raise over $30,000.
Tracy Hugill, an official from AWARE, who facilitated the Hollywood star’s visit said her organisation is working with Shannon under the actress’s Animal Avengers charity which acquires veterinary supplies for AWARE.
Hugil said her organization has been carrying out a rhino de-horning exercise in the Kyle national park thanks to the support from the actress’s animal charity work.
Apart from starring in American Pie series, Shannon also is part of the main cast in the Scary Movie.
The actress describes herself as “a story-teller by profession, an animal lover to the core and a conservationist/activist in the making”.
She adds; “I want to be involved in projects that are moving and thought provoking.
“I want to make a difference in this world, whether it’s through my acting, directing, photography or speaking out for those who don’t have a voice.”Advertisement