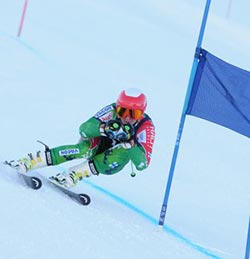 THE slogan of the Sochi Olympics – “Hot. Cool. Yours.” – hits home for Zimbabwean alpine skier Luke Steyn, who will be representing his subtropical country in its first Winter Olympics.
“I don’t think there has been any recorded snowfall in Zimbabwe in something like the last 40 years,” the 20-year-old skier said in a telephone interview.
Zimbabwe’s highest point, Mount Nyangani, which stands at 2,592 metres, is 272 metres higher than the Rosa Khutor Alpine Center where Steyn will competing at the Sochi Games. But the temperature in Zimbabwe in the winter can reach up to 21 degrees Celsius and the country receives only one metre of precipitation annually, none of which is snow.
Steyn was born in Harare but moved to Switzerland as an infant. He still feels attached to his country of birth, despite being raised in Europe and attending the University of Colorado in the U.S.
“Once it is in your blood, it is in your blood,” he said.
“I feel still very connected to Zimbabwe and Africa as a whole. I spend as many holidays as I can there. When I am not training or in university, I am in Zimbabwe or in other parts of Africa. The beauty of Africa always makes you want to go back there.”
In Sochi, Steyn will become part of the exclusive group of skiers who have represented an African country at the winter Olympics.
He will be joining Philip Boit, a cross-country skier from Kenya, who competed in the Nagano, Salt Lake City and Turin Games, and Ghanian alpine skier Kwame Nkrumah-Acheampong, nicknamed the “Snow Leopard” for his flamboyant leopard-print body suit, who finished 48th out of 49 skiers in the slalom in Vancouver.
Unlike Boit and Nkrumah-Acheampong, Steyn is a white athlete representing a country that is 99 percent black, and it was unclear how most Zimbabweans feel about him being the first winter Olympian from their country.
But Steyn said he had received congratulations from people in the country when it was announced that he would be competing in Sochi.
“A lot of the time, when I turn up at a training, people expect me to be black,” Steyn said. “I find this quite amusing. My whole family is white African and we are used to this, but people in Europe sometimes do not realize that you can come from Africa and be white.”Advertisement

An equally fraught issue is his being an athletic ambassador for a country with a much-criticized human rights record. Steyn said it was not his job to fix the government.
“I represent Zimbabwe as an athlete,” he said. “I represent our competitiveness and our sporting ability. I am not a politician. I concentrate on what I am here to do, which is to compete.”
A dual citizen of Zimbabwe and Britain, Steyn recognizes that his Zimbabwean passport has been key to his Olympic adventure.
He admitted that the criteria for the British ski team are more difficult and said he probably would not have met the requirements to make the squad. But he said he never even thought of trying to compete for Britain because he had always represented Zimbabwe.
“And I always will,” Steyn said.
Funding troubles
The road to the Games is long and arduous for all athletes, but even more so for athletes from small nations who often struggle to secure funding to cover training expenses.
Before backing out of qualifying races for the Sochi Games, the website of Ghana’s one-man ski team urged “little angels” to spare a Ghanaian cedi, a pound, a dollar or a ruble to pay for training expenses, transportation and  accommodation.
Nkrumah-Acheampong – who had yet to secure flights to Sochi as of October 2013 – was looking for someone to lend him a truck to drive the 5,758 kilometers from Accra, the capital of Ghana, to Sochi.
But Steyn’s situation is not as dire. The Zimbabwe Olympic Committee received funding through the Olympic Solidarity Commission to send Steyn to Sochi.
Over its history at the Summer Olympics, Zimbabwe has earned eight medals, seven of which were won by swimmer Kirsty Coventry in Athens in 2004 and in Beijing in 2010.
Steyn, who took a year off from his studies in business management at the University of Colorado to compete at the Games, will most likely not win Zimbabwe’s 9th Olympic medal. But for the first-time Olympian, being in Sochi is a triumph in itself.
“I have come to realize that I am still a pretty young skier,” he said. “Most Olympic alpine skiers are in their late twenties. I am treating these Olympics as a stepping stone. My goal is to ski as well as I have been training.”