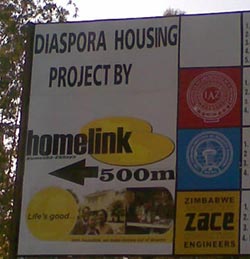 HOMELINK, the company established by the Reserve Bank of Zimbabwe (RBZ) to encourage the millions of Zimbabweans living abroad to buy properties and invest back home has been sold to a South African firm.
Sources close to the transaction said Wednesday that South Africa-based ADDAX Trading had succeeded with a bid to buy 100 percent of Homelink Private Ltd US$22 million.
“Addax outbid other willing investors but they are some conditions precedent,” said one official.
No official comment could be obtained from the central bank.
A management consortium backed by a foreign partner also bid for the company along with the Zimbabwe Stock Exchange-listed retailer OK Zimbabwe.
The RBZ has put several assets and investments up for sale in a bid to reduce a debt said to be over US$1 billion which critics blame on the policies of former governor Gideon Gono who left the central bank last year after ten years at the helm.
Assets being sold include the RBZ’s 70 percent shareholding in Tuli Mine, 50 percent in Transload (Private) Limited, 65 percent equity in Scientific Research and Industrial Development Corporation and its 100 percent stake in Carslone Enterprises.
The Reserve Bank has already sold its 59 percent stake in ZSE-listed Tractive Power Holdings to Zimplow Limited in a deal worth about US$10 million.
Last year, Japanese coating company Kansai Plascon Limited acquired RBZ’s 63 percent shareholding in Astra Industries.
The central bank is also in the process of disposing its 64 percent in Cairns Foods.
Homelink was established in February 2005 to help mobilise foreign currency remittances from the Diaspora at Zimbabwe was facing serious foreign currency shortages.
Over the years, the company adapted to the changing business environment and transformed itself into a fully-fledged financial services company also targeting the local market.
Homelink now offers a wide range of financial services products which include home loans, micro-financing, property construction, property management and money transfer services.
The company runs a housing development scheme, a mortgage financing Scheme for non-resident and locals. The Housing Development Scheme has seen more than 600 Zimbabweans at home and abroad becoming home-owners.Advertisement