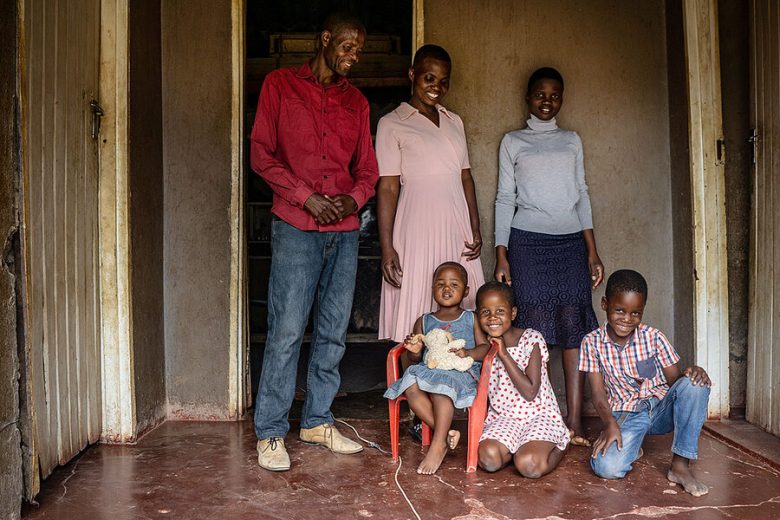 The Mutsakani family stand outside their home in Epworth, on the outskirts of Zimbabwe's capital. The coronavirus lockdown has worsened many Zimbabweans' economic challenges.
Spread This News

THE ousting of Robert Mugabe raised hopes of Zimbabwe’s political rebirth, and parents’ hopes that their children’s possibilities would be different from their own. Ever since the Monitor has followed two families’ journeys.

Angela Simbi squinted to read the crumpled piece of paper delivered to her by the city council in early October. Part of her family’s brick home in the suburb of Mbare was an illegal structure, the letter explained, and the family must demolish the extra rooms they’d added.

If they didn’t, the notice warned, the government would come do it for them.

Dread welled in her chest. This house had been in Ms. Simbi’s family since the 1970s, when the white minority government built a settlement of three-room houses for Black workers on the southern edge of the capital, and she and her husband had moved in.

It was the house where she’d raised her children, and where those same children had begun to raise theirs.

In April 1980, she’d walked out the front door and down the road to Rufaro Stadium to see a bookish former liberation fighter named Robert Mugabe take his oath of office as the first prime minister of an independent Zimbabwe. That night, as crowds waved the new country’s new flag, Bob Marley crooned about a Zimbabwe where “every man got a right to decide his own destiny.”

And 37 years later, on a brittle summer day in November 2017, Angela’s daughter-in-law Progress Garakara had woken up inside the same house and felt the first jolts of labour pains. By then, Mr. Mugabe had been Zimbabwe’s head of state longer than Progress had been alive. He’d become an oppressive nonagenarian who bore little resemblance to the guerrilla fighter who’d danced to Bob Marley.

But as Progress walked out of the Simbis’ house in Mbare, shuffling toward the public maternity hospital a mile away, Mr. Mugabe was, improbably, on his way out. Later that day, as she cradled her newborn daughter Aleeya, he announced his resignation.

In their little house in Mbare, the Simbis broke into celebration – for Aleeya and for the new country she’d been born into.

But now, as Angela clutched the demolition notice, she and Progress could barely remember the hope they’d felt that day. Zimbabwe was once again in crisis: its economy in free fall from mismanagement and a global pandemic, its politics every bit as repressive as under Mr. Mugabe’s watch.

“If God really kept a secret, it was of what was to come after Mugabe was gone,” says Progress, whom the Monitor first met in November 2017, a week after Aleeya was born. “We were so happy the day he stepped down and we thought life would be better.”

Instead, a pandemic had pushed an already crumbling economy to a breaking point, and pushed Zimbabweans fed up with its unkept promises into a new wave of protests. There was little sign of when, or how, things might get better.

On the eastern flank of the city, in a house wedged between bulging boulders and small hills of tan clay soil in the suburb of Epworth, Joseph and Moreblessing Mutsakani also struggled to make sense of their country’s slide. Their daughter Meryl had been born the same day as Aleeya, in the same jolt of optimism and possibility.

“Welcome to all the Zimbabwean children born on this day,” Zimbabwean novelist NoViolet Bulawayo had written on Facebook hours after Mr. Mugabe resigned. “You’re our most precious, most untarnished promise, may you never see what we’ve seen, may you know, finally, a Great Zimbabwe.”

When they looked at Meryl, who was growing like a weed, tall and sturdy, with a babbling monologue that trailed constantly across their house, the Mutsakanis could still feel the echoes of that promise. But it was growing faint.

Even before the pandemic, the couple struggled each month to cobble together the $360 needed to send their four older children to school, buy groceries, and pay rent.

“We live in a very poor community where there are many things that can spoil a child’s future,” Joseph says, and he and his wife were determined not to let their children’s school fees go unpaid.

Between Joseph’s odd jobs in construction and Moreblessing’s work as a tailor, they usually had just enough to hold things together.

Then on March 30, 10 days after Zimbabwe confirmed its first case of COVID-19, the country went into a rigid lockdown. President Emmerson Mnangagwa, Mr. Mugabe’s former deputy, ordered all nonessential workers to stay home for 21 days; soldiers and police manned checkpoints into city centers to enforce the law. From March to July, they arrested tens of thousands for violating restrictions.

Overnight, the Mutsakanis’ income shriveled. Suddenly, no one was buying new clothes. “People just have no money for [it],” Moreblessing explains. Construction work slowed to a trickle.

In Mbare, the Simbis also watched their livelihoods dissolve.

Progress had once made her living selling used clothing brought across the border from South Africa, as did many Zimbabweans. But with the lockdown, borders had closed.

The family’s savings began to dwindle. Soon, so did the stores of food in their house.

As prices of staples surged, the family got wind of some promising news: The government was selling subsidized cornmeal – a Zimbabwean staple – at certain grocery stores.

So at 10 p.m. one night in April, Alfred and Progress escorted Angela to a nearby supermarket, where a line was already beginning to form. Angela should wait, the family reasoned, since older adults were being given priorities in the overnight queue.

But when the staff unlocked the doors the next morning, the crowd surged forward, pushing aside the older people at the front, including Angela.

The desperation shocked her. In normal times, respect for age meant something. But not in a country on an empty stomach.

Angela limped away from the commotion bruised and empty-handed. She didn’t dare return. Instead, the Simbis scraped up the money they had earned selling small sachets of milk and bottles of frozen water, and bought a sack of nonsubsidized maize meal.

All around them, Mbare had become a kind of small-scale market. Along the Simbis’ street, tottering 50 kilogram bags of cornmeal and scales appeared in several yards, so that people who couldn’t afford the 5 kilogram bag in the supermarket could at least buy enough to tide them over.

Meanwhile, frustration over the government’s handling of the pandemic was boiling over. In July, the minister of Health was fired over a $60 million COVID-19 graft scandal. On the 31st of that month, demonstrations against corruption were crushed by police and the military. Activists were arrested and abducted, and a hashtag announcing the crisis, #ZimbabweanLivesMatter, lapped the globe.

“There’s so much politicization of things in Zimbabwe. There are those who profit from the suffering of others,” says Alfred. Our leaders “might talk about our other problems on TV but beneath it all there’s a lot of rot and corruption and that’s what’s killing us.”

Then, on Oct. 5, the family answered a knock at their door and were handed the city’s demolition order.

It was an echo of 2005, when six extended rooms they had added to their house were flattened as part of Mr. Mugabe’s Operation Murambatsvina, or “drive out the filth.” The demolitions displaced around 700,000 Zimbabweans in an effort to stop cities’ boom in informal growth – and, many suspected, punish the urban voters who supported the country’s main opposition party.

It took the Simbis two years to rebuild, with the help of Oxfam and other nongovernmental organizations. Now, under a new government, it was the same story.

“This house is mine, I have all the papers, but now they want to break it down. Where am I supposed to go?” Angela asks.