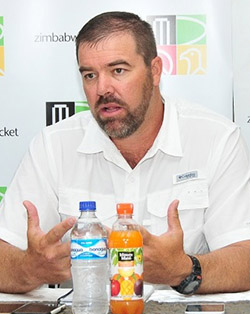 October in Zimbabwe is pregnant with expectation. After the long, dry months of winter, the heat is back, without the rain – so, each afternoon, eyes are drawn to the gathering clouds in anticipation that that might be the day the heavens finally open.
Until the rains come, the air remains heavy with the accumulated haze of winter’s fires, the giant trees look tired from thirst and the heat becomes oppressive. By evening, the clouds have dissipated, taking hope with them. Maybe tomorrow.
Zimbabwe cricket has built a similar feeling of anticipation on a handful of occasions since 2009, when it first began to stir from the tumult of the post-rebel period. But, each time, like an October afternoon, hope turned to more disappointment.
It is probably better to whisper it, then, but as Zimbabwe prepare to play their 100th Test on Saturday, expectation is in the air once more. There have been times in the past few years when every Test, no matter how painful the result, felt worth savouring for the simple fact that they came along so rarely.
What, one might wonder, are the odds of Zimbabwe playing another 100 at the current rate, in the current environment?
Those odds will always be determined by happenings beyond the boundary, which too freely dictate the rise and (mostly) fall of Zimbabwe’s on-field fortunes. Yet, at least now, there are positive movements that could bring improvement to those playing the game.
Heath Streak has come in as head coach, adding stability after a chaotic few months in which the inexperienced Makhaya Ntini was thrown in at the deep end, probably unfairly. More significantly, having now had several months to get his teeth into his new administrative roles, Tatenda Taibu feels that the wheels are starting to turn.
Advertisement

Breaking away from an umpire’s meeting delivered by former Zimbabwe international and ICC match referee Andy Pycroft on Thursday morning, Taibu confirmed that the domestic season is due to start on November 22 and should run through to August.
Significantly, as many as 40 contracts are expected to be offered, ranging from one to three years. This is a major improvement on the paltry six-month contracts that domestic cricketers have previously been offered for a pitifully short first-class season.
Equally important has been the increasing number of fixtures enjoyed by the Zimbabwe A team, who have hosted South Africa A and Pakistan A in recent months. Those tours, along with a visit by a Sri Lankan Development Emerging side in July, have begun to unearth new talent that Streak has promised to make use of.
Finally, challengers are emerging to the old faces in the Zimbabwe side, who have maintained their places because of a lack of alternatives. Fast bowler Carl Mumba and top-order batsman Tarisai Musakanda could make their international debuts in the two-Test series against Sri Lanka after impressing for Zimbabwe A.
“When I took on the job, I said that I wanted to push some of the youngsters, but I also said that I wanted to create a platform for young guys to showcase themselves,” said Streak.
“Before, when you didn’t make the national side there was nothing below that, other than domestic cricket, or there were gaps of no cricket, which made it difficult for guys to get back in the side or showcase their ability.
“So that’s definitely something I’m going to create, and I’m also looking at succession planning, and where we see gaps and where we see youngsters, that will be able to fill them. That will reflect in contracts, in selections and in age-group teams – working out what we need to keep supporting the national team.”

e for us, because it is very much a rebuilding time, but because of injuries we’re forced to accelerate that process and play some young guys,” coach Graham Ford said.
“Some of the young chaps that will play have been in and around the Test squad for the last while but haven’t got much game time. This is a chance for them to show what they can do and for us to assess them further, and hopefully they’ll take that opportunity.
“We do have a really tough series coming up in South Africa over the Christmas period, so it’s important that we keep trying to make progress. When we played England in England we got beaten but the key was to make progress and I think we did improve along the way. We certainly improved against Australia, and we’re going to need to keep improving if we’re going to compete against South Africa in South Africa.”
Such a schedule is the envy of Zimbabwe’s cricketers, who have played just six Tests in three years – as many as Sri Lanka have played this year alone. Streak feels that if they are to make immediate improvement, a new culture is required.
“Obviously it’s still very early in my tenure, but what I hope people will be able to see [in this series] is a change in mindset,” Streak said.
“I want to encourage the guys not to be scared of losing and not to like losing. In the past we had this mindset where we’re just happy to be able to compete and not embarrass ourselves at this level. And as a group we’ve spoken about it and decided we’re not happy to do that any more. We’ve got to take things forward.”
Of course, as has been the case for so long in Zimbabwe, events away from the field will determine how long progress on it may last.
With Zimbabwe Cricket carrying $19m debt and no fresh income streams on the horizon, it is difficult to see how they can afford a bigger and better domestic system, more contracts, a proposed new academy and more tours for the A team.
ZC’s finances have been in such disarray that, nearly 10 months after the end of their financial year, they are still to have an audit signed off – a situation that has put them at odds with the ICC’s new requirements.
In theory, there is much to be positive about. But until the issues of finance and administration are taken care of, the game in Zimbabwe will continue to feel like another hot afternoon in Harare, when the rain just won’t come.