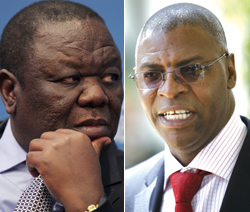 The following is an document prepared in September 2012 by a proponent for a coalition agreement between the two Movement for Democratic Change (MDC) factions led by Morgan Tsvangirai and Welshman Ncube. It was offered to the two parties for discussion but talks never materialised and the two parties look set to enter general elections on July 31 still split. We publish it for the benefit of our readers and will withhold the name of its author at their request:
AS IT looks as though any form of reconciliation between the two MDC factions will not happen, most Zimbabweans would want to minimise the electoral damage of the two factions opposing each other in a Westminster Constituency/First Past the Post system.
Ideally, the two formations could agree not to challenge each other in the few constituencies where it may significantly advantage Zanu PF. Obviously, this could be difficult to agree on. Difficult, but not impossible.
However, the benefits to each party hugely outweigh the costs. There are 83 advantageous situations to seven possibly disadvantageous situations. Mutare South is a typical example:

In cases such as these (and there are many of these), Zanu PF has won the seat, thanks to the MDC’s divisions. It isn’t easy, however, to convince a candidate that they can’t stand in an election, even if it is for a greater good.
It is my belief that it was actually the complete inability of the two MDC formations to formulate a mechanism to choose a candidate in constituencies where they both had structures that played a large part in preventing any attempts at MDC unity.
However, in a case like Mutare South, a reasonable person could ask: has the MDC led by Welshman Ncube trebled its support in this constituency? The MDC also lost seats because of the split; for example:

There were many seats where the split made no difference to Zanu PF’s fortunes; either because Zanu PF was very weak in that constituency:

Or because ZANU PF were overwhelmingly strong in that constituency:
Advertisement

Disadvantageous being defined as not being allowed to field a candidate when that party had (roughly) more than 30% of the winning vote in 2008. As I only identified 7 possibly disadvantageous situations, I list them below.
Firstly those disadvantageous to MDC-T:

And those disadvantageous to the MDC:


Now a major problem with working out the formula based on the 2008 election results is that things have changed, and all 3 political parties will claim they have massively gained support. In some constituencies, this may have happened. In others, a reasonable person might find it unlikely that one party will have increased its support by more than 500 percent.
Another problem is that agreeing among the MDC factions to allow each other to go unopposed in their strongholds will further strengthen a tribal and geographical emphasis amongst the parties, particularly MDC. However, the majority of seats in the country would be open for all 3 parties to field candidates in.
Furthermore, if MDC-T were to allow MDC to go unopposed in Mudzi South, for instance, the MDC might win its first seat in Mashonaland, something that seems unlikely otherwise.

And even within constituencies where one or other faction were not fielding a candidate, that faction should still maintain its structures there, ideally supporting the other MDC’s candidate.
I have only looked very cursorily at the statistics of 2008, and made some off the cuff recommendations of where it wouldn’t matter if both MDC factions fielded candidates (labelled “OPEN”) or where it would be advisable in my brief opinion that  only MDC-T fielded candidates (Labelled MDC-T Only) or MDC only field candidates (labelled MDC only).
A final list would have to be the result of much further thought, research and discussion and negotiation in good faith. I have only done a cursory proposal as I fear the arguments over the possibility of 7 disadvantageous situations will scupper the possibility of 83 advantageous situations, but if both sides were interested we could do further work.
It was sobering to see the same party fielding two candidates in some constituencies, in 2008 always to the detriment of that party.
By province, here is a breakdown of the seats where we recommend an “open” election, or whether we recommend only MDC-T candidate stand, or only an MDC candidate stand.
Bulawayo Metropolitan
11 open
1 (by election)