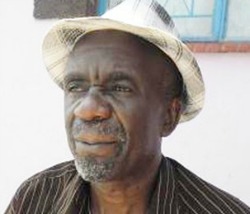 MUTARE: After putting a spirited performance at Mujuru’s Zim People First maiden rally at Sakubva recently, controversial musician, Hosiah Chipanga, has spoken about his links with the new political outfit.
Affectionately known as ‘Kwachu kwachu’ by his legions of fans, Chipanga who played his latest album Gamba which was overwhelmingly received by the massive crowd, said he shared the same vision with Joice Mujuru’s party way back before it was formed.
“I had a vision of a country where people freely expressed themselves way back before Mai Mujuru was ousted from Zanu PF. I am a visionary who has been seen as a mad man. If I don’t say things as they are then I am not being honest to my legions of fans. I share the same vision with Mai Mujuru’s party,” said Chipanga.
He said it was sad that some radio stations were not playing songs from his latest album on grounds that it was political. “I don’t know why some stations are not playing my music. I sing for people not to please individuals,” said Chipanga.
Most tracks in Gamba dwell on the socio- economic problems affecting the citizens. The album touches on land reform, nepotism, corruption to mention a few.
Chipanga also penned a song for the late decorated army general Solomon Mujuru who died in a suspicious inferno at his Beatrice farm in 2011. He said the late general’s contribution towards the independence of the country cannot be brushed aside.
“I knew Rex Nhongo on a personal level. He would attend all my shows in Beatrice during the 2006 and 2007 album tours where I played Gushungo and Musikavanhu.
“Solomon is not a political song, it’s a tribute to the hero who spent a better part of his life dodging bullets and missiles during war of liberation and sadly died in an inferno,” said Chipanga.
The album Gamba also castigates rampant corruption at Marange diamond fields and police officers who demand bribes from poor citizens.
Advertisement