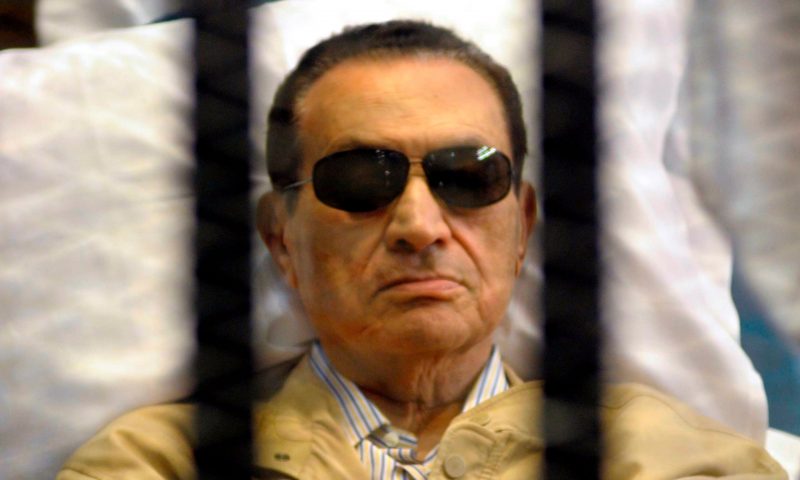 HOSNI Mubarak, Egypt’s autocratic former president who ruled with an iron fist for three decades before being toppled during the Arab spring protests in 2011, has died aged 91.

Mubarak became a symbol of thuggish and brutal authority after taking power in 1981 following the assassination of Anwar Sadat. His reign was marked by the emergence of a paranoid and cruel police state supported by a network of sprawling military businesses and corrupt crony businessmen. Many Egyptians see echoes of Mubarak’s style of leadership in their current leader, the former general Abdel Fatah al-Sisi.

The former president’s family said he had recently been taken to hospital and was in intensive care following an operation to remove a stomach tumour.

A statement from the office of the Egyptian presidency praised Mubarak’s military record in the 1973 war against Israel, naming him “one of the leaders and heroes of the glorious October war”. “He assumed command of the air force during the war that restored dignity and pride to the Arab nation,” it said.

Egypt’s armed forces also released a statement of mourning for the longtime air force officer and military leader. “The General Command of the Armed Forces mourns one of its sons, and one of the leaders of the glorious October war,” it said. Three days of mourning were announced.

US administrations showered Mubarak with billions of dollars in military aid, viewing him as a bulwark against regional terrorism and a key driver of “cold peace” with Israel. In the west, Mubarak became seen as a draconian but businesslike leader who could be relied on to keep western interests intact and maintain peace with Egypt’s neighbours. Tony Blair once praised him as “immensely courageous and a force for good”.

Yet at home, unemployment, poverty and resentment about Mubarak’s lavish lifestyle continued to grow. A years-long loosening of some of the more draconian elements of his rule, allowing Islamists to obtain seats in Egypt’s parliament as independents in 2005 and allowing limited press freedom, could not stop a rising tide of discontentment.

In January 2011, following the ousting of Tunisia’s longtime ruler in the first act of what became known as the Arab spring, protesters overtook Tahrir Square in central Cairo and other major Egyptian cities demanding an end to Mubarak’s time in power.

His cronyism, his corrupt leadership and his security forces’ cruel treatment of the Egyptian populace galvanised a generation. Protesters called for “bread, freedom and social justice” and an end to military rule

Mubarak oversaw a violent response that resulted in the deaths of at least 846 people, according to a later government inquiry. After 18 days of protests, his 29-year reign was ended in a 30-second video message from the then vice-president Omar Suleiman.

“My fellow citizens, in the difficult circumstances our country is experiencing, President Muhammad Hosni Mubarak has decided to give up the office of the president of the republic,” he said. Protests rapidly became celebrations, as demonstrators chanted “we have brought down the regime”.

“Hosni Mubarak was the first Egyptian president since Nasser to leave office standing. He lived long enough to go from experiencing disgrace to witnessing an even more brutal dictator replace him that has left many in Egypt missing his presidency despite how reviled he once was,” said Timothy E Kaldas of the Tahrir Institute for Middle East Policy.

Mubarak was the first of the leaders toppled in the wave of Arab uprisings to face trial. In scenes that captivated Egyptians, he appeared in a courtroom cage on a range of charges.

In 2012 he was jailed for life for conspiring to murder protesters and sent to Cairo’s Tora prison, though he was occasionally moved to the Maadi military hospital nearby amid claims of failing health.

In 2015, he was sentenced in a separate case to three years in prison, accused along with his two sons, Gamal and Alaa, of embezzling public funds for the renovation of presidential palaces, part of a long and protracted set of corruption charges, as well as attempts to reclaim money held in Switzerland. His sons were acquitted this month over a separate set of charges concerning illicit trading.

In 2017, Mubarak was acquitted by Egypt’s highest appeals court of conspiring to kill protesters. He was freed from the Maadi military hospital, where small crowds of supporters routinely gathered outside his bedroom window in support.

Mubarak’s reign was seen by critics and supporters alike as a prototype for that of Sisi, who seized power in a military coup after a brief rule by Egypt’s only democratically elected president, Mohamed Morsi. Morsi died in court last June following allegations of prolonged medical neglect in prison.

Many of those who rose to prominence in the uprising against Mubarak have since been imprisoned or left the country amid a crackdown on civil society and free speech under Sisi.

Asked to comment on Mubarak’s release from prison in 2017, the human rights lawyer Mahienour El Massry, who was rearrested in a crackdown after fresh protests last year, said: “In the eyes of those who believe in the revolution he will always be a criminal killer and the godfather of corruption. This might be another round that we have lost, but we will keep on fighting to change the inhuman regime that releases criminals and imprisons innocent people.”