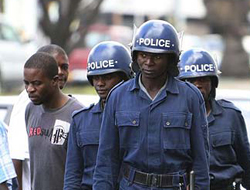 FIRST the price of mobile data went up drastically overnight. Then it emerged Zimbabwe’s government is preparing a law to give its feared security forces new powers to intercept private communications, seize devices such as smartphones and jail “abusers” for up to five years. An army chief said this was needed to deal with “cyber‑based destabilisation”, since technology was being used to “mobilise people to do the wrong things”.
Desperate times call for desperate measures. For after 36 years in power, Robert Mugabe’s chokehold on his country seems to be slipping. There have been public-sector strikes, street protests, desertions by key allies, even demonstrations at a cricket Test Match. The economy is shattered, cash machines empty, supplies in shops dwindling, and state coffers so dry that the regime struggles to pay salaries to its henchmen in the police and army.
The spark was lit by a brave Baptist pastor, who filmed a video with the national flag around his neck as he lamented Zimbabwe’s plight. Now this flag has become a subversive symbol, whether worn by street traders infuriated by a ban on import of basic goods or used as a hashtag by middle-class protesters on social media. Hence the attempt to shut down online agitation in a land ruled by repression.
So severe is the latest fiscal collapse, so frustrated the people of Zimbabwe, that Mugabe is even at odds with his war veterans. Once these unsavoury comrades, who led the seizure of white farms, sprang to the despot’s defence with violence; now, with grotesque hypocrisy, they condemn corruption and dictatorship. Behind the scenes rages a savage fight for succession between the president’s second wife, a former spy chief and a deposed ally.
No wonder opposition leader Morgan Tsvangirai says the 92-year-old president’s rule is coming to an end. He might just be right – although this has been predicted often before. Certainly, Mugabe’s iron grip on power has rarely looked so weak since gaining independence from Britain in 1980, even when Zimbabwe endured the second worst hyperinflation in history in the 2000s.
So this is a strange time, to put it politely, for Britain to back “re-engagement” and lead global efforts to assist this revolting regime. It sounds incredible, but our diplomats and development officials are pushing a plan to prop up Mugabe. Britain has been promoting a refinancing package to ensure his debt-ridden government can pay off £1.4 billion of arrears owed to multilateral donors. This would aid its credit status and allow emergency loans from the International Monetary Fund, thus ensuring police beating up protesters and party loyalists who keep communities in check can carry on their dirty work.Advertisement

Lord Mandelson even met with Patrick Chinamasa, Mugabe’s finance minister, on a trip to Harare in February. Last month the Zanu-PF minister came to London, where he held “marathon” talks with the investment bank Lazard over a potential £800 million loan for the regime. Mandelson chairs a division of the bank – although he insists he was just encouraging reform in Harare. The meeting there, incidentally, was arranged and joined by Britain’s ambassador to Zimbabwe. The moves to shore up Mugabe dismay Washington. Leaders of this brutal kleptocracy have stolen thriving farms and billions from huge diamond deposits, ensuring the decrepitude of Africa’s best-educated nation. Those backing the bail-out idea insist fresh financing must be accompanied by “monetary stability” and “meaningful reform”, while mouthing platitudes about human rights. The alternative, they argue, is implosion.
Yes, the situation is perilous. Zimbabwe has suffered drought, falling commodity prices, and from the rising dollar. Its fortunes impact on neighbouring nations. Yet Mugabe has a record of breaking promises to lenders, while only the most naive observers think real reform likely when he and his cronies remain in charge. There are also local suspicions that Britain is backing one faction in the succession fight, although these are denied.
Little wonder the shameful plan dismays many who are fighting to oust Mugabe and save a shattered country. Fewer people hold formal jobs today than when he took over, although the population has doubled. Up to three million Zimbabweans have feld to South Africa. The state payroll, padded out with party loyalists, has doubled in four years. The budget for presidential travel is five times bigger than capital spending on health. As police go unpaid, roadblocks have proliferated to shake down drivers.  There are concerns over sudden change. But progress is a chimera under this regime. Few Zimbabweans trust their thieving leadership, while the courage of protesters resisting police batons only underlines the depth of despair. I have spoken to human rights groups, political opponents and long-suffering professionals in Harare, all of whom are incensed by Britain’s intervention. They fear a fresh injection of finance will only aid a cruel cabal’s entrenchment in power. Prominent figures accuse us of appeasement. It is not hard to understand their anger.
This artcle is taken from The Telegraph