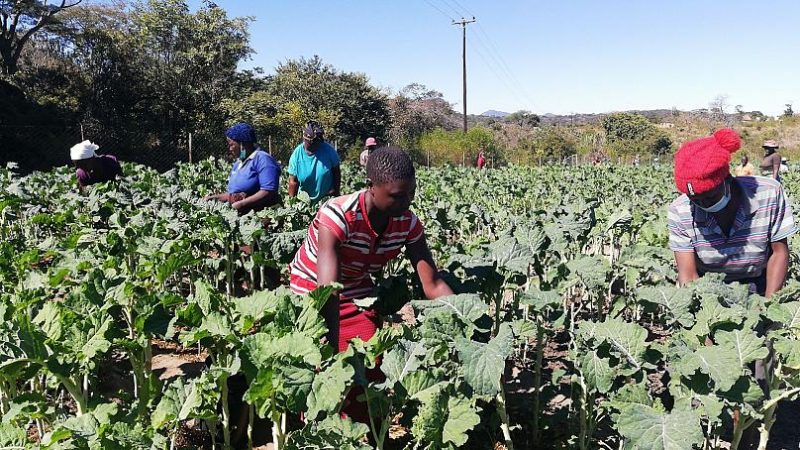 ON A sweltering afternoon, Angela Ruvando fetches water from a pit using a bucket and waters her leafy green vegetables in a community garden in Muchenga Village, Bikita.

She is just 300 kilometres south of Zimbabwe’s thriving capital, Harare.

In this arid, sparsely populated part of Zimbabwe’s Masvingo Province, the sun scorches while the air is thick with heat during the day even in winter – and it gets worse in summer.

26-year-old Angela runs her garden using rainwater captured from nearby streams and transported into a community dam known as Musvanhi Dam.

The harvested water allows her to keep the garden green through to the dry season in this dry parched area where most of the land is barren apart from drought-resistant acacia and Mopani trees.

The Musvanhi Dam may not seem like much but its impact on the lives of smallholder farmers like Angela is huge.

As a mother of one, she recalls how they used to dry vegetables during the rainy season for the family to rely on during the dry season – back in the years before 2015 when the dam was constructed.

“Back then having a meal served with fresh vegetables was a luxury,” she laughs as she narrates the whole ordeal.

“We could only grow some vegetables during the rainy season at home and near the streams.

The challenge was these streams could run dry within a few months. It was painful seeing the garden drying up because of water shortage.”

Caritas Masvingo, a Catholic Church faith-based organisation with its funding partner, Trócaire, came to Angela’s rescue with the ‘Resilience and Sustainable Livelihoods Programme’, running from 2017 to 2022.

It’s not only human beings relying on these two community dams, more than 7,000 cattle, goats, and sheep use them as their source of drinking water.

Angela is now among the nearly 9,000 people in Bikita who are benefiting from the Musvanhi and Manjererwe Dams – both whose water is captured from nearby streams during the rainy season.

And it’s not only human beings relying on these two community dams, more than 7,000 livestock including cattle, goats and sheep use them as their source of drinking water.

At Musvanhi Dam, water flows along the pipes using the gradient to fill up constructed pits in the community garden while at Manjererwe Dam they use a solar-powered pump to fill up some tanks which the supply taps.

Angela grows carrots, tomatoes, and onions, along with traditional varieties of grains such as millet, Bambara nuts, groundnuts, and sorghum back home.

“I use the vegetables to feed my family. I sell the excess to other villagers providing me with an income to pay fees for my child and as well as buying other needs,” she says.

Zimbabwe has an agriculture-based economy and heavily relies on rain-fed agriculture and livestock – but recurring droughts over the years have had serious implications on food security.

The country is in a constant state of food shortages, with 2016/2017 witnessing the worst El Nino-induced drought in three decades. The droughts then continued into the 2018/2019 and 2019/2020 cropping seasons.

At the end of 2020, the United Nations (UN) World Food Programme estimated that the number of food-insecure Zimbabweans was up to 8,6 million people – a staggering 60 percent of the population.

The southern African nation, which was once the breadbasket of the continent, will import an estimated 1, 1 million tonnes of grain in the 2020/2021 marketing year to meet demand, according to the UN Food and Agriculture Organisation.

But this year there have been unusual rains in most parts of the country and the government recently projected a bumper harvest for many farmers.

In Bikita, water harvesting is not only at the community level but even at the household level.

Masceline Matingwadza, a smallholder farmer from Matingwadza Village, has constructed waterways that collect water from the corrugated roofs on all the buildings at her home, transporting it into a storage pond.

“This water helps us to water our crops as well as increasing soil moisture in the fields because when the pond is full there is a contour where it flows throughout the field. The pond normally lasts up to April when we harvest our crops,” the thirty-six-year-old explains.

This water harvesting strategy helps her to conserve water which is essential for a good harvest.

“I am growing crops for family consumption as well as for sale,” she says.

Masceline tells Euronews that the water harvests at a household level, which was rolled out to nearly 200 smallholder farmers, are essential in providing water for irrigation during the dry season.

“Even at individual homes there is a micro wetland that needs to be protected with the advantage that there is limited runoff which washes away soil across landscapes,” she says.

“Instead of letting the water flow away, the farmers ensure that the water is trapped and drains into the soil which not only increases soil moisture but also increases the water table.”

Very Reverend Father Walter Nyatsanza, a Caritas Masvingo director, says agroecology promotes Indigenous varieties which are more nutritious. These do not require fortification and can be multiplied at the smallholder farmer level.

“This is an effort to improve seed availability and seed sovereignty,” he says, adding that traditional varieties are ideal in countering the effects of climate change in dry parched areas like Bikita.

Masceline says farmers who follow agroecological practices have had better yields compared to those that did not.

Agroecology is the route to a secure future

So far, many organisations in Harare have been encouraging the adoption of good agricultural practices that promote soil and water conservation as a way to adapt to climate change and variability. This is vital to ensure the future of the region, explains Paul Zakariya, an executive director at Zimbabwe Farmers Union.

“As part of agroecology and production of traditional grains, this has seen households in the drier regions of the country meeting their food and nutrition requirements,” he says.

For Angela, she hopes the garden will be expanded for her to scale up her farming venture.

“My wish is to venture into commercial farming. I can see myself supplying vegetables to businesses in Masvingo,” she concludes.