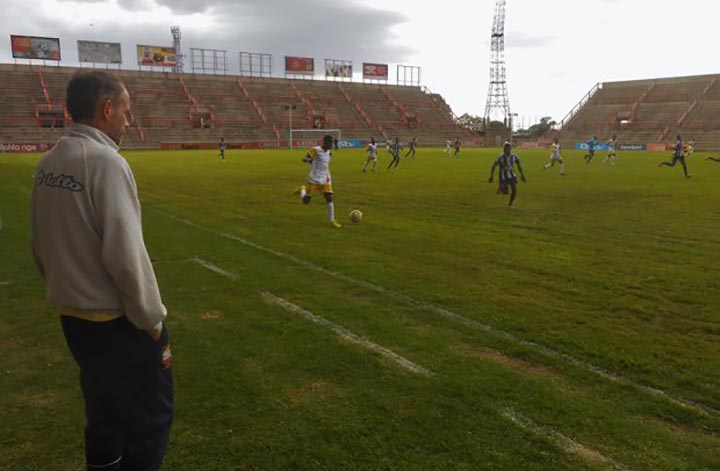 ANCIENT boots and no shin pads in sight, but a burning passion for the beautiful game – this is football for young men in Zimbabwe. Yet against all odds, the team representing MatEbeleland are preparing for the World Cup, which comes to England this summer.

Yes, you read that right – talented players from across the globe will meet in London for the Conifa World Cup, which kicks off on May 31.

Weeks before the eyes of the sporting world focus on Russia, the alternative tournament involving nations not recognised by Fifa, such as stateless people and disputed territories, gets under way. Competitors include the United Koreans in Japan, North and South Koreans who play together in the same team.

Barawa, a district of Somalia who have used football to combat terrorism in their homeland and whose stadium was recently bombed, are also taking part.

And then there’s Matebeleland, a team with minimal resources who, with the help of their British coach, have honed their skills on dusty African pitches and in a turbulent political climate.

But with just a week to go until the tournament their involvement still hangs in the balance over a lack of funds. It’s not the easiest place to live, let alone play or coach football – but the generic path wasn’t an option for Justin Walley.

The globe-trotting Englishman, Matebeleland’s head coach (and social media manager, and communications manager – you get the gist) has a job that’s about as challenging as it gets within football.

Many of his players grew up in poverty, and the country remains politically volatile after Robert Mugabe was overthrown last year.

Describing the first time he met the young men, Justin, 47, told Metro.co.uk: “They are from poor backgrounds and they’re just trying to make ends meet – the majority of people here are struggling to some extent.

“With most of them, their boots were falling apart, they didn’t own a pair of shin pads, and their shirts were torn.

“But they are nice, friendly lads. They’re not in gangs or anything like that, they’re just from poor backgrounds and violent backgrounds.

“I was impressed with how they played, they were very good technically, good one touch players.”

Matebeleland, a region within Zimbabwe, has a troubled past. In 1983 and 1984, an estimated 20,000 of the indigenous Ndebele people were killed by Zimbabwe’s army, who also disrupted food supplies causing major shortages.

Locals describe the massacre as a genocide. Wounds remain to this day in the form of poverty, violence and crippling unemployment levels predicted to be a staggering 90%.

But many of the young men of the country are obsessed with football and the English Premier League, and are inspired by star African players such as Liverpool’s Mo Salah.

Justin said: “Football is life, it is a religion here. It represents much more than it does in Europe.

“It provides hope for millions of young men across the continent, and when you’re a decent player you believe you can make it.”

Justin had been coaching in Latvia but, having spent time in Africa in the past, was looking for a fresh start in a developing country. Matebeleland needed a manager, but despite Justin’s experience, some of the complications surrounding his new job were a shock.

He said: “African pitches are generally rubbish, and there was a lack of infrastructure and equipment.

“Last year the political situation was unravelling. That was a culture shock in terms of limiting where I went, what I did… and what if my presence was misintepreted?

“The financial position is such a mess. There is a cash shortage here, so there’s long lines to get cash from Western Union.

“It just makes life awkward, it’s the thing that’s really messing Zimbabwe up.’ That’s particularly the case when you are raising funds to fly a large group of young men from Zimbabwe to London.

Matebeleland’s football team receives no funding, and their involvement in the Conifa World Cup relies on online crowdfunding pages where supporters can buy their kits – a football hipster’s dream.

If the team does make it to London, they’ll link up with new goalkeeping coach and Liverpool cult hero Bruce Grobbelaar, who has agreed to join Justin’s coaching team.

The manager added: “It doesn’t seem real. I think until we are actually there, none of us believe it is going to happen.

“We have done everything we can to be ready and provided we get to London, I think we can give a good account of ourselves.”

The World Cup in Russia is a million miles away from its Conifa equivalent, which will be played in the likes of Enfield, Bromley and Sutton.

It features 16 teams including Tibet, Panjab, who are based in England and represent the punjabi community, and defending champions Abkhazia.

This article is taken from metro.co.uk.