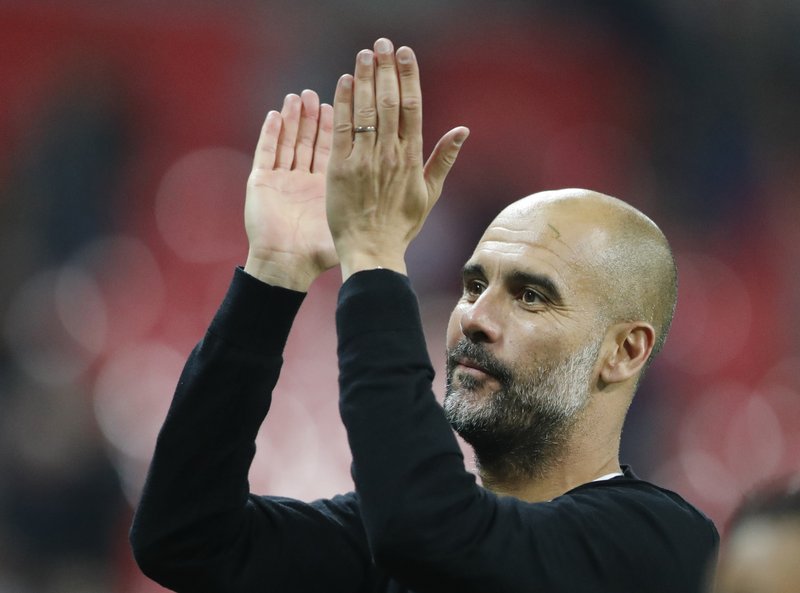 MANCHESTER: What do you get when you combine the world’s most coveted coach, financial backers with bottomless pockets, and the most talented group of players in the country?

Answer: One of the most ruthless, convincing title triumphs in the 26-year history of the English Premier League.

Manchester City wrapped up the title on Sunday when Manchester United, the nearest challenger, surprisingly lost 1-0 at home to West Bromwich Albion. City leads by 16 points with five games still to play.

A side meticulously molded and prepared by Pep Guardiola won a record 18 straight Premier League games from August to late December, and they’ve put up plenty more impressive numbers.

Eighty-seven points, 93 goals, a goal difference of plus 68, 28 wins from 33 games. The current lead of 16 points is one of the biggest in the league’s history.

Guardiola didn’t win a trophy in his first season at City. His reaction? To spend 200 million pounds ($260 million) of the club’s Abu Dhabi owners’ riches in the offseason, upgrade and tweak the weakest parts of the team, and deliver arguably the most stunning brand of football ever seen in English soccer.

Here’s a look at how Guardiola achieved the turnaround:

The blueprint for this season’s record-breaking success was laid in the second half of last season, when Pep Guardiola found his formula.

Largely sticking to a 4-3-3 formation with Leroy Sane and Raheem Sterling as wingers, Guardiola dispensed completely with his occasional use of a three-man defense. City lost just two of its last 24 games in all competitions from the middle of January last year, providing momentum to take into the 2017-18 campaign.

Throw in some key summer signings and some tactical tinkering, and City has proved to be unstoppable. 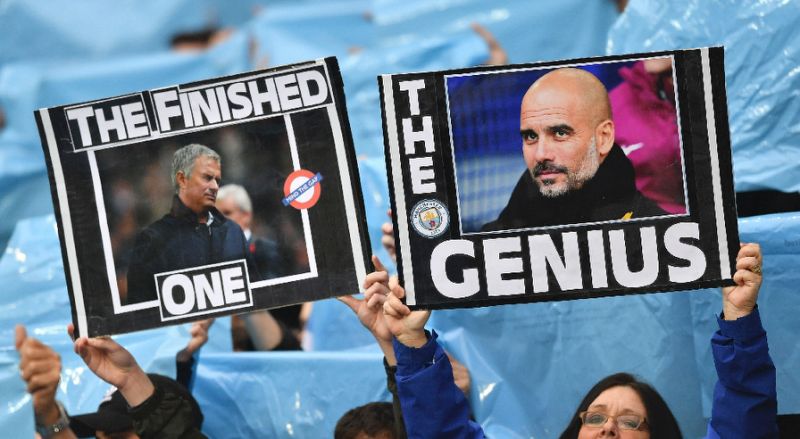 Pep Guardiola places huge significance on the impact of full backs in terms of his team’s attacking game plan, needing them to act as both wingers and defenders.

Mendy got injured in September so his impact has been negligible while Danilo has been little more than a backup. It’s Walker’s presence that has added a new dimension to City, his raids up the right wing allowing Raheem Sterling to come inside more and give the team greater numbers in the box to convert chances.

It’s no surprise that Sterling has had the most prolific season of his career, scoring 22 goals in all competitions so far.

Brazilian goalkeeper Ederson Moraes joined for $45 million from Benfica and has been a huge upgrade from Claudio Bravo with his shot-stopping and pinpoint long passing with a booming left foot.

Bernardo Silva, signed for $55 million from Monaco, has slowly developed into a key squad player, providing cover for Sterling and Leroy Sane.

It’s a minor tactical switch that has had a major impact.

Pep Guardiola’s decision to deploy Kevin De Bruyne in a deeper central-midfield role has allowed the Belgian to demonstrate his all-round skills, notably his vision, work rate and reading of the game. He’s been able to keep up his regular supply of assists, too, setting up 16 goals, with passes and through balls that are beyond many of his peers.

One performance, in a 7-2 win over Stoke in October, stands out. In that game, De Bruyne set up one goal with no-look pass to Leroy Sane, before supplying the winger for another goal with a diagonal through ball that sliced through four defenders.

De Bruyne’s new role also got the best out of central midfield partner David Silva, who has played just ahead of De Bruyne and been given license to go forward more.

The use of two central-midfield playmakers is new to English soccer — and has produced handsome results.

When City beat Swansea 4-0 on Dec. 13, the team established an English top-flight record of 15 straight victories — surpassing the 14-match winning streaks of Arsenal (2002), Preston (1951), and both Manchester United and Bristol City in 1905.

City would go on to win three more games before drawing 0-0 at Crystal Palace on Dec. 31, ending the winning run at 18.

City was undefeated at that stage, raising the prospect of going through the season unbeaten like Arsenal’s Premier League “Invincibles” of 2003-04. A 4-3 loss at Liverpool on Jan. 14 put paid to that, but the league title was virtually wrapped up already.

That winning run started with Raheem Sterling’s goal in the seventh minute of injury time in a 2-1 victory at Bournemouth on Aug. 26. It wouldn’t be the last decisive late intervention by the winger.

City, it seemed, wasn’t just playing the best football in the division, but had more resilience and fortune than any other team, too.

Along the way, some notable performances established a champion-in-waiting aura around City.

The first was a dominant 1-0 victory at Chelsea on Sept. 30, when the defending champion was played off the field at Stamford Bridge. Two weeks later, that 7-2 win over Stoke featured some imperious attacking play.

Then there was the 2-1 win at Manchester United on Dec.10, featuring scrappy goals at set pieces from David Silva and Nicolas Otamendi, that left City 11 points clear of its neighbor. With not even half the season gone, United manager Jose Mourinho said his team’s title hopes were “probably” over.

Back-to-back wins across 72 hours in early March — 3-0 at Arsenal and 1-0 at home to Chelsea — all but confirmed what everyone had known for weeks: City was going to be champion.

It just needed clinching then. A 3-2 home loss to United in the derby denied City the chance to win the league in record time — with six games left — but Guardiola’s team only had to wait another week.