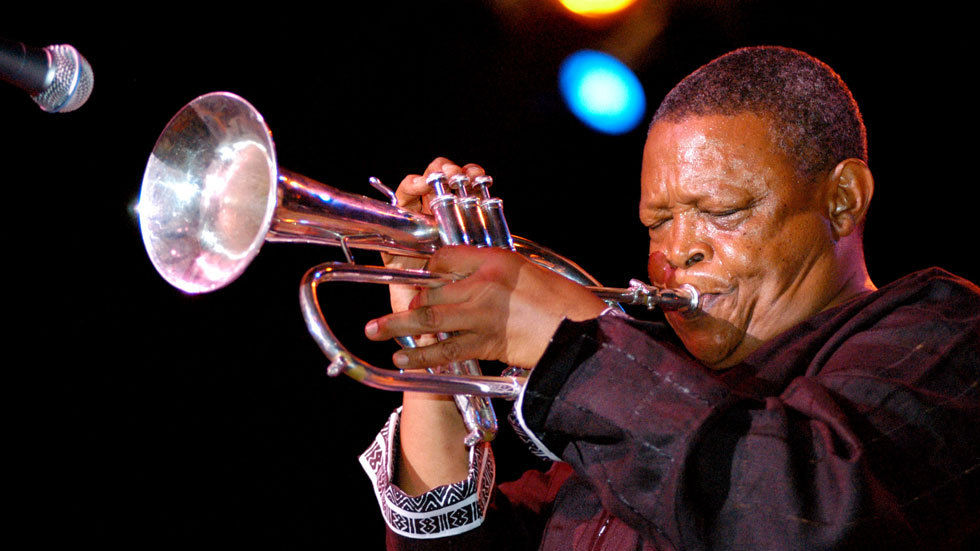 The world continues to pay tribute to the legendary Hugh Ramapolo Masekela who died on 23 January 2018. His journeys have reminded us that the itineraries of South African exiles — writers, journalists, performers, photographers, and political activists — have much to offer transnational histories of anti-apartheid resistance.

Masekela knew some formative moments during his own long exile. Radical black internationalism, pan-Africanism and anti-apartheid resistance were all woven into the texture of his sound. Masekela traversed these universes without ever relinquishing his claims to musical autonomy and creative agency as a black artist who made a living through his art.

Masekela’s 30 years of exile began shortly after the Sharpeville Massacrein March 1960. That is when the apartheid regime’s police opened fire on a group of black protesters in the township of Sharpeville, south of Johannesburg, killing 69 people.

The young Masekela was already a rising star in the Sophiatown jazz scene when he left his motherland. Once in New York, Masekela dreamed of blending into the golden era of black jazz as a virtuoso beboptrumpeter.

Although Masekela’s entry into the American music industry was relatively smooth thanks to the mediation of his future wife, the already exiled singer Miriam Makeba, his career veered away from bebop.

After his separation from Makeba, Masekela moved to Los Angeles in the summer of 1966 in the slipstream of the relative success of his third album “The Americanization of Ooga Booga” (1966).

This decision was a game-changer. Masekela was invited to participate in the prestigious Monterey International Pop Festival in California in 1967. He then released his first hit and chart-blazer “Grazing in the Grass” (1968).

Around this time, the first signs of radical black internationalism came to the fore in Masekela’s music emerging on his 1969 album, “Masekela”, arguably the first politically direct album in his oeuvre.

In his 2004 autobiography Masekela defined one of the songs in the album in question, “If There’s Anybody Out There Who Can Hear Me”, as,

a lament about police brutality, racism, and unfair imprisonment of black males, the suffering of the Vietnamese, and the conscription of innocent young men into the army to fight and kill people who had done nothing to harm them.
Stylistically an American blues-rock song, it is performed from the point of view of a black South African responding to the experiences that shaped America during the late 1960s. Masekela screams “from down here below” in the hope that he will be strong enough to finish his story.
Pan-Africanist inspiration

Dazzled by the fame of “Grazing in the Grass” topping the US charts, the young Masekela spent much of his new fortune on drugs and alcohol. Still, he recorded two notable albums during the early 1970s in collaboration with fellow exiles, Caiphus Semenya and Jonas Gwangwa. “Masekela and the Union of South Africa” (1971) and “Home Is Where the Music Is” (1972) both blended the sounds of South Africa with contemporary black musical production in the US.

In 1972 Masekela decided to travel to Africa in search of musical inspiration. His friendship with the Nigerian political activist and pioneer of Afrobeat, Fela Anikulapo Kuti, would leave a deep imprint on him as he developed an awareness about the vibrancy of music-making on the continent.

During his travels through Guinea, Nigeria, Liberia, Zaire and Ghana, Masekela was exposed to energetic political debate pivoting on competing pan-Africanist agendas, anti-imperialism and the consolidation of nation-building initiatives in decolonising Africa.

Back in New York with the esteemed Ghanaian band, Hedzoleh Soundz, Masekela was able to restore his reputation. He fully committed himself to a new vision: raising awareness of contemporary African music on the other side of the Atlantic.

Rumble in the Jungle

With record producer Stewart Levine, Masekela quickly went on to produce the famous “Zaire ‘74” festival. This three-day black music event was intended to precede the famous boxing bout known as the “Rumble in the Jungle” between George Foreman and Muhammad Ali.

The festival fell short of Masekela’s expectations of producing a “black Woodstock” in Africa, not least because boxing match was postponed due to Foreman’s injury which deprived “Zaire ’74” of its function as curtain-raiser.

Masekela did not himself appear at the festival. Yet “Zaire ’74” would be crucial in consolidating his prominence as an icon of the anti-apartheid struggle.

Anthems showing acute political involvement began to emerge from Masekela’s oeuvre from this point onwards. One of his most famous anti-apartheid anthems, “Stimela”, was written one gloomy evening in a Woodstock club during a drinking session back in 1971. It was recorded in March 1974 as part of Masekela’s album “I Am Not Afraid”.

Masekela’s opening monologue lists all the places from which labour migrants travel to Johannesburg to work in the city’s mines. The song poignantly emphasises the pain of travelling to a place from which there is no easy return. The mechanical scream of the train functions as the moment when the body of the exiled Masekela becomes a weapon of protest: with exquisite drama the voice of the displaced musician serves to introduce the artistry of his trumpet solo.

Over the years Masekela’s courageous voice against the injustices of apartheid was loud and clear. There are numerous examples, but we cite two.

“Soweto Blues” was written in the aftermath of the 1976 Soweto Uprising. It was when young black people in the township rose up against the apartheid government’s directive to make Afrikaans compulsory as a language of instruction in schools.

Then there was the 1985 hit “Bring Him Back Home” triggered by a birthday card smuggled out of Pollsmoor Prison from then incarcerated ANC leader Nelson Mandela to Masekela.

In September 1990 Masekela returned from exile. This concluded his physical journeys. But as musicologist Lindelwa Dalamba has pointed out, addressing Masekela’s pan-Africanist musical indebtedness after his death:

The journeys that Masekela mapped for us as a nomad in exile cannot be said to have ended.