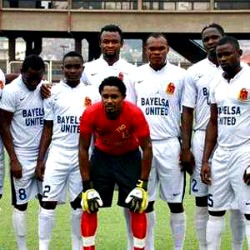 ZIMBABWE’S representatives in the Orange Caf Confederations Cup, How Mine, crashed out of the continental competition when they lost 2-0 to Nigerian outfit Bayelsa United on Saturday.
The gold miners took a slender 2-1 first leg lead to an unfamiliar territory of Nigeria but as fate would have it, it had to be the all too familiar script of a local team that starts high but falters just as Zimbabweans were beginning to believe.
Again, the familiar story of biased referring and crowd trouble, knocked the stuffing out of Zimbabwe’s only remaining ambassadors in club competitions.
After managing to hold the hosts to a goalless score line for a good 60 minutes into the match, the Caf Confederations Cup debutants needed just that to progress to the next stage.
But a goal by Bayelsa United’s Jafar Buhari on the hour mark meant the visitors had to find a goal to avoid crushing out through the Away Goals Rule.
As they continued searching, hopes were dashed 10 minutes from time when the hosts struck again through Azubuike Okechukwu.
But with a bit of luck, the Bulawayo outfit could still force the match into extra time if they had got a goal to produce a carbon copy of the first leg result.
Despite the defeat, How Mine had their own heroic moments when their goalie Ephraim Mazarure summoned all his experience to deny the hosts on two occasions in either half.
How Mine also felt short-changed by the referee who denied them a penalty in the 79th minutes when Bayelsa United’s centre-back Gabriel Ikechukwu appeared to have handled in the box.
Instead, the visitors were awarded a not so helpful free kick outside the box.
Coach Philani Ncube felt his game plan was frustrated by crowd trouble when the hosts’ officials and their supporters, probably annoyed by the visitors’ determined defending right into the breather, descended on the visitors’ players when the match officials were still held up in their dressing room.
Defender Brighton Dube emerged in the fracas with a cut above his left eye and played the second half with a bandage.
“First, l give credit to my players for doing their best under those circumstances. We started the game well but after my players were assaulted, followed by the referee’s questionable decisions in the second half, everything changed,” Ncube said in an after match interview.Advertisement

“Our game plan was to hold them and defend from the centre, restrict them to play the ball in their half and force them to take long range shots. We also congested the mid-field and tried getting them on counter but the referee frustrated us going forward continuously blowing the whistle for non offences.”
The fall by the gold miners means the country is no longer represented in any continental club competition Zimbabwe champions Dynamos also crushed out of the Caf Champions League club competition.